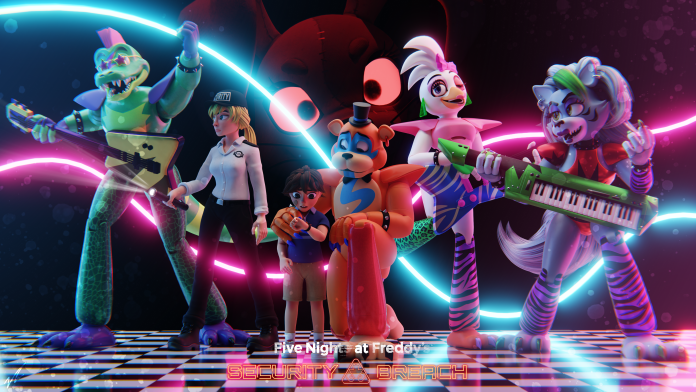 If you are a game lover and love to play Five Nights at Freddy’s: Security Breach, here is the full list of the Security Breach characters of the game, along with their roles. Remember that we need to add some story spoilers to discuss the role of the characters properly in this article.

Gregory is a young child who is the main character of the game. Gregory has mistakenly got trapped in Pizzaplexed, from where he cannot find any way out. With the help of Glamrock Freddy, he needs to escape the plaza. At the same time, he also needs to hide and run away from all his pursuers.

She plays the character of a security guard in the game, and also she is the main antagonist in the storyline. She will appear as a security guard at the initial stage, but later in the story, she will take the role of Vanny. This character is involved in a lot of endings, and in some of those, the character reveals itself. In those cases, you will need to go through more challenges while being at the plaza. The challenges will be more difficult than just surviving.

In this storyline, Freddy is going to be your main companion. You will need to run away from Security Breach, and in this journey, Freddy will help you by providing you with several tips to escape. You can also call him to hide inside him to escape as well. Freddy will allow you to exit him whenever you want, but if you stay inside him in the complete gameplay, his charge will start dropping, and if you stay within him while it happens, the game is over. Also, you will need to take him to the charging stations to stock up on his batteries so that you can use them when you need an emergency escape.

He is a hostile animatronics that comes in the form of a wolf. She can sniff around and find Gregory if he is near her. You’ll be able to damage her later by repairing a Driver Assist S.T.A.F.F. bot, using it to ride a kart, and ramming it into Roxy. Remember that you will get engaged in a boss’s fight if you do so.

It is a common animatronics in the game, and there are also several versions of this bot, like the map bot, which will provide you with the map, and the security bot that roams around the plaza. These only have one job: ringing the alert to call other animatronics to hunt you.

It is a hostile animatronics that you can find inside the plaza. This can often be found eating and scavenging areas to eat. You will be able to distract her by using several props, and later on, in the game, you will also be able to damage her by using a Monty Mystery Mix and placing it in a compactor. Though she usually roams across the plaza randomly, she can also surprise you by checking the hiding spots and catching you.

Another hostile animatronics in the game which is the fastest among all. Speed is not everything he has; he can also jump around to find you while you are exploring the Pizzaplex. Damaging this animatronic can be a bit tough. You’ll need to shoot targets during Monty’s boss fight while you are also running away from it. Once you shoot that target several times, you will pour the huge bucket containing plastic balls into Monty. This can break the base on which he is standing, and once it is broken, he will eventually break.

You will encounter it in the daycare. It will be friendly with Gregory but only until the lights are on. Once the lights go off, it will trigger the split personality of this animatronic, and it converts into Moonman, who will be a hostile animatronics. You can also encounter it at the end of each hour, so you must be careful while stepping into a new hour.

It is a miner animatronic which will appear inside the vents. It will not chase you outside the particular premises.

These animatronics will only move if Gregory is not looking at them. Each of them has different statistics and tactics. For example, some of them can move faster than others. Usually, you can encounter them in the parts and service areas, but after the said areas are cleared, you can start encountering them at other parts of Pizzaplex as well.

It is the largest animatronic that you will encounter in this game. It will be sleeping in it’s DJ station in the initial stage, but you will need to wake it up. You can just simply turn on the generators to wake them up. As it is massive and huge, it will not go out of it’s DJ station. Once you are done clearing all the hurdles of turning on the generator, you will not need to fight it in the game.

So, these are the main security breach characters of the game. This is definitely an excellent game and if you have not played it yet, it’s the time to explore.