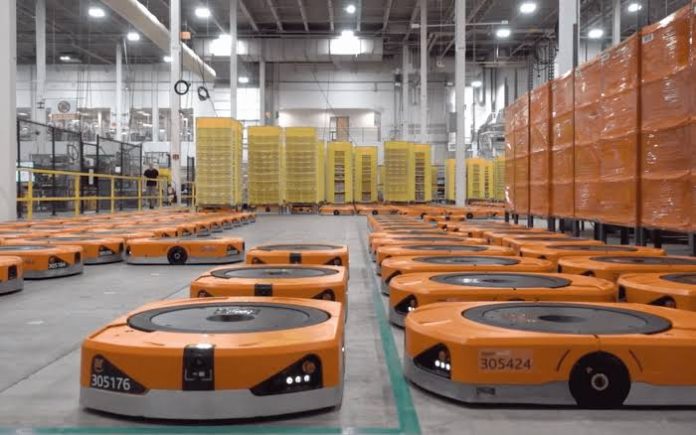 To automate the regular works of scanning, lifting, and shifting in the warehouse, Amazon announced two robots and new technology for better results.

One of them is a fully autonomous robot to lift and shift the packages around, in a safe and smooth way. Next up is a robotic arm that can lift upto 50 pounds and place them accordingly. And finally an AI-based quick scanning technology to speed up the process.

One of the hardest jobs a retailer does is to stuff his warehouse properly, so he can be able to pick out an item quickly whenever needed. And doing it on a large scale needs more smart resources. In this pursuit, Amazon has introduced two new robots and a new scanning technology that can ease the warehouse works.

The company today unveiled Proteus, a fully autonomous robot that can lift carts and carry them around the warehouse. This robot goes with a green beam light ahead of it – which acts as a clearing line for it’s route. So if anyone or anything steps up in between, it halts moving.

Proteus is made with advanced safety, perception, and navigation technology as to not hinder the humans’ work in the warehouse, besides doing it’s job in a designated way. Next up is a robotic arm named Cardinal, which Amazon said can scan a package’s bar/QR code and place it accordingly.

This robotic arm can lift upto 50 pounds in one go, and places as per the description – all with the help of AI and computer vision. Lastly, there’s a new scanning technology based on AI, that can automatically scan packages going through an order. Amazon is planning to deploy these technologies in all it’s warehouses soon.