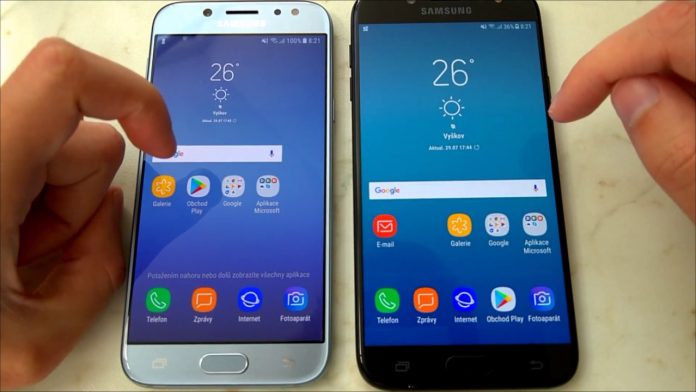 The J series is one of the most successful mobile phones the Samsung has ever created.

Samsung may be proud of the achievements of the Galaxy S series and Note for record sales that are increasingly rising from year to year. However, there is one line that escapes the view that helped Samsung to become the number one cellphone manufacturer in the world. Is the Samsung Galaxy J series, which also contributed to Samsung’s achievement to package the percentage of market share very fat in the global mobile market. This is because the J series lined up to be an affordable mobile line but still prioritizes specifications that cannot be considered ordinary.

Of course Samsung does not underestimate the results of this achievement. Therefore, in the near future they will soon release a perfect. If previously the series was ‘cheaper’, the Samsung Galaxy J3 2017 has been released in the land of Uncle Sam some time ago, now it is the turn of his two more capable brothers who will be coming soon.

As the name implies, the Galaxy J5 2017 is a continuation of the Galaxy J5 2016. The 2017 J5 specifications will certainly be better than its predecessor. Take for example the processor that will use the eight-core Exynos 7870 series with a maximum speed of 1.6 GHz. Increased from before using only the Snapdragon SoC series low-end Snapdragon 410. This processor will be combined with 2 GB of RAM and 16 GB of internal storage space. Another improvement will be found on the camera, on the front side will be 13 MP camera with f / 1.9 aperture, while behind the camera stop is 13 MP with f / 1.7 aperture. A 5.2 inch screen will adorn the front of the J5 2017, a Super AMOLED panel type with a 720p HD resolution. What really makes me amazed is that from the design side, the J5 2017 looks like it has a charming body, even slightly similar to the Galaxy A 2017 whose segments are at the level above the J. series. Rounded corners, metal wraps all over the body of the phone, plus an antenna line unique looks other than most mobile phones that have been circulating on the market add to the attractive impression of the J5 2017 2017. The Galaxy J5 2017 will be offered with various color variations, ranging from black, gold, light blue, to red

Even though it is positioned slightly more expensive than the 2017 Galaxy J5, the fact is that the Galaxy J7 2017 carries several points of specifications similar to its siblings. Both use the Exynos 7870 processor, the same front and rear camera resolution, the same color options, and a similar design that is also made of metal. Differences will be found in the dimensions & screen resolution. If the J5 2017 has a 5.2 inch screen dimensions, the J7 2017 will be a little more spacious with a size of 5.5 inches with a 1080p resolution Super AMOLED panel. Oh yes, the size of RAM will also increase to 3 GB, but with the same internal memory, it tends to be small with 16 GB.

Availability & Prices
Duo Samsung Galaxy J5 2017 & Samsung Galaxy J7 2017 is rumored to be released in the near future, around June with estimated prices of around 280 euros for the Galaxy J5 2017, and 340 euros for the Galaxy J7 2017. Both of these are forecasts of availability & prices for Germany. However, when viewed from the price side, it seems that these forecasts do not apply to the Indonesian market. Because if you convert it it will become too expensive … or will it really be that expensive? Hope not.