Google’s Android is an open-source operating system which can be transformed according to one’s needs. Now the researchers working at Google will dig out all the bugs and vulnerabilities on different android skins made by OMEs.

Android has a history of the operating system which contains a lot of bugs and vulnerabilities. With the presence of these bugs, the operating system is open to the risk of hacking and data leaked. This is a serious concern which is worrisome for many android users especially those who are privacy-focused.

One thing a user should keep in mind that Google doesn’t control all the aspects and elements of an Android device. There are multiple android manufacturers and many devices are different from each other in terms of price, specification, characteristics and OEM.

Nearly 70% of all smartphone users own an Android device which makes it the biggest mobile operating system. Google always tries to resolve the security issues and android and brings many improvements with every android update. But the problem is there are many android skins available and not every OEM and android app developer gets the advantage of Google security.

Hence, the researchers working at Google start looking for bugs and vulnerabilities on every OEM skin. They will find out all the errors and address the issue of security occurring due to these errors.

The initiative of finding bugs, errors and vulnerabilities is named as Android Partner Vulnerability Initiative (APVI). The research team at Google already found many errors in the android skins and they reported it to the OEMs. These OEMs include the major manufacturers like Huawei, Smartphone, Oppo, VIVO, ZTE and Meizu.

Unfortunately, after being reported these issues were still not fixed and there is no response from the manufacturers. For public awareness, Google on its own has created a website where it published all the errors and loopholes on the android skins.

Google already launched the official version of Android 11 last month but the OS is not perfect and contains many bugs. As the latest version is currently available for the pixel phones, some users report bugs that cause disruption in multitasking.

Due to the disruption, the user faces difficulties in accessing the recently used apps. It also causes disturbance in the swipe up gesture which opens the app drawer and multitasking tray. The gestures and recently used app tray are an important feature in android and are used on a daily basis by everyone. 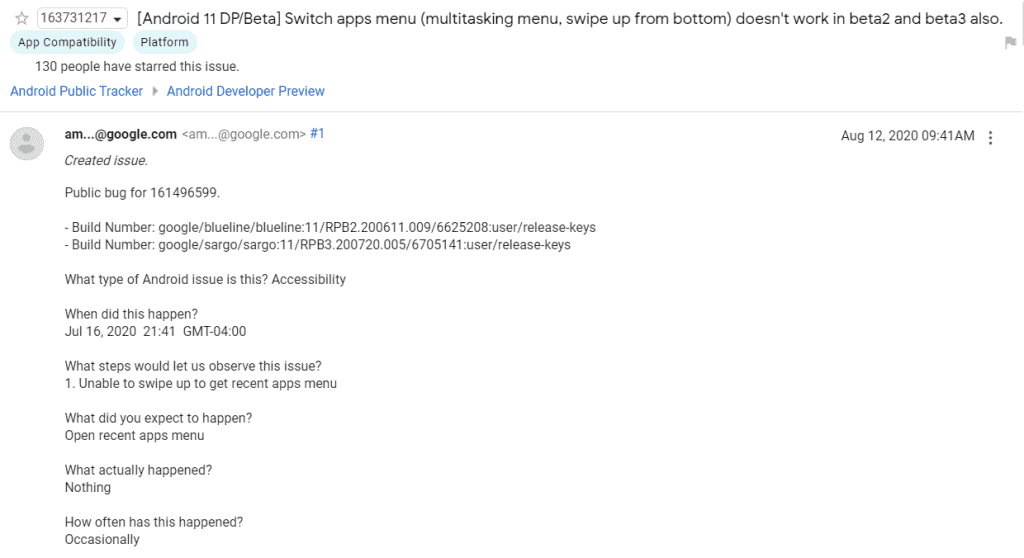 Another bug reported where the device flashes back and the help of a strange zoom effect. And after this effect, users won’t be able to launch any application further.

This multitasking error caused further many errors and it is reported recently on many platforms. Users report this issue on sites like Reddit and on forums like Android 11 Support Forum and Pixel Community Forum. The question that arises here is “If there is a quick solution to this problem”. The answer to this is “Yes” as some users report that they temporarily solve this issue by locking and unlocking the device. But it is not a proper solution as the issue appears after some time. Google needs to fix this via a software update, we hope that with this month’s security update Google fixes it.

The good thing is Google knows about this issue and Android 11 Forum states that it will be fixed in the upcoming software update.
(Source)