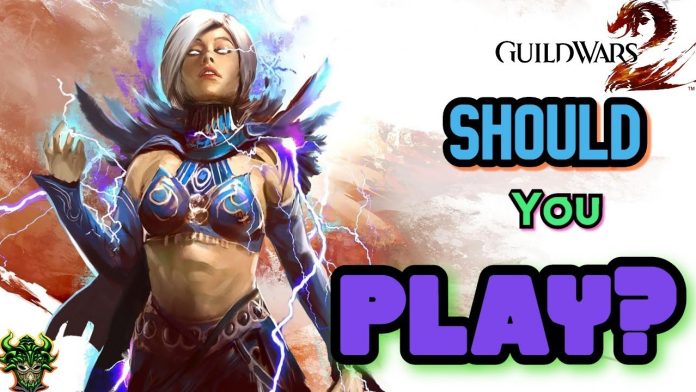 Guild Wars 2 is a massively multiplayer online (MMO) role-playing game (PRG) developed by ArenaNet and debuted in 2012 for Microsoft Windows and macOS. It is the fourth major game in the Guild Wars series and is unique from other MMORPG games because it allows the players to complete quests in different approaches.

The approach is based on the actions taken. This dynamic questing system adaption is common among single-player role-playing games but rare in multiplayer games. Another improvement that made this game unique compared to other MMO games is that the combat system is synergy based and dynamic, allowing the player to use the environment as a weapon. It was reported that over two million copies of the game were sold in the first two years.

Being an old yet golden game, the system requirement for Guild Wars 2 is not very demanding. The requirement is different for Microsoft Windows and macOS platform-based systems.

Is the game free to play?

Guild Wars 2 is free to play (without expansions) and is streamable on Steam. The developers made the core game free for all in 2015. For expansions and DLCs, you would have to pay. As of now, there are three expansion packs titled Heart of thorns (2015), Path of fire (2017), and End of dragons (2022). A fourth expansion is also expected to be available for playing soon.

Purchasing expansions comes with a bunch of attractive privileges. After buying an expansion, you would be able to convert gold into gems with the currency exchange. It also unlocks the mailing privilege that is only for paid accounts. Raids become accessible, and the Revenant profession is playable after you pay for the expansion. You get five slots for characters, and you can buy cosmetics, episodes, etc., with the gems.

How it differs from other MMO games?

The game includes a Conquest, a deathmatch between two teams, and a primary PvP. World vs. The game offers massive open-world combat known as World vs. World, which is held between 3 different worlds. It combines the PvE and PvP where several dozens of people join a single map and involves more than six servers. In this mode, you must protect your keep and towers using siege weapons to gain control over the camps.

The plot of Guild Wars 2

In a world full of fantasies, some powerful creatures are known as the Elder Dragons. Elder Dragons are ancient creatures that have existed since the beginning of time and cause havoc and chaos in the world when they awake from their deep sleep. The period of their hibernation and havoc over the world after awakening spreads over several millennia, where a millennium is around a thousand years.

A guild named Destiny’s Edge was created in the continent of Tyria to fight and dismantle these destructive forces of nature. Different warriors joined to make an alliance, putting their differences and race aside to fight the common enemy, the Elder Dragons. All of this movement happened after 250 years after the first guild war.

After the first guild war, the guild got disbanded. When you start playing Guild Wars 2, you start as an apprentice. Five Elder Dragons had been sleeping for hundreds of years beneath the continent of Tyria and had just awoken to cause mass destruction and havoc in the world.

In Guild Wars 2, your mission is to bring together all warriors from different areas and races who have been enemies to each other for a common cause. The newly formed guild is the only hope that can fight the five Elder Dragons to stop them from destroying the world.

There are multiple MMO games out there, but the combat system in Guild Wars 2 is the best. This is because the combat is very dynamic in nature. There are so many options for weapons and techniques to kill your enemies.

At the bottom of the screen, there is a skill bar which is very crucial in Guild Wars 2 in killing your enemy. As for spells, you can have ten unique spell techniques from a huge list of spells. However, spells are related to the profession of your character. Following is a brief explanation of some combat techniques.

Slot 1 to 5: The skill of weaponry

The skills in these slots depend on your character’s profession and the type of weapon you use. The profession is very important because the same weapon will have a different set of skills for a character with different professions.

For instance, using a bow for a warrior is different than for a ranger. The weapon is primarily the same, but the professions are different. In these five slots, the first three skills depend on the weapons that you hold in your hands, while the rest of the two skills depend on your off-handed weaponry.

Slot 6: The skill of healing

Healing boosts your health and makes your character normal again. The sixth slot of your skill bar is for healing purposes. When you start playing, you are only given a core healing skill; for unlocking other healing skills, you would be required to spend some hero points.

Like the previous five slots, healing skill is also based on your character’s profession. For example, there is a healing skill called ”Receive the light” which is exclusive to the Guardians. Similarly, Thieves can use a skill named ”Hide in shadows” to go into stealth mode to buy some time for healing. There are four skill variations for each class.

Slot 7 to 9: The utility skill

These skills can be used for various purposes. For instance, using utility skills, you can apply debuffs on your enemy or buffs on you and your allies. By now, you would have guessed already that utility skills are also profession dependent.

With utility skills, you can immobilize the enemies, set traps to prevent enemies from stepping onto a path, and even boost your power. These utility skills have made the game very interesting to play. For example, the Revenants can summon magical hammers to create a shield around themselves. The shield also harms enemies if they try to touch it.

Consider these skills as battle tide-changing skills. These skills have a long cooldown and recharge time. You cannot use them frequently, and some skills even take up to 4 minutes for a recharge.

To use an elite skill, you must reach level 31 and first unlock some healing and utility skills. One such example of an elite skill is the Battle Standard, which is usable by Warriors only. This skill summons a banner that will kill nearby enemies and revive all your nearby allies.

PvE mode has two types, one is an open world, and one is instanced. For instanced PvE, there are mini-dungeons, raids, and strike missions. These mini-dungeons are known as fractals, require level 80, and have different tiers of difficulty.

Open PvE includes new maps, events, and world bosses. The raids in Guild Wars 2 are probably the most exciting part of the game because you need proper techniques and good coordination with the team members to complete the raid. The dynamic events in the game give you a very realistic gaming experience. You can go help a farmer, capture a person, etc.

PvE also allows you to explore Tyria, which will make you familiar with the areas around.

Like any other MMO game, Guild Wars 2 has a PvP mode where players play against each other in an equally balanced toughness for both players. One thing to note is that you cannot use sigils, attributes, and runes from PvE mode in PvP mode.

When playing in a PvP mode, every player is assigned a level of 80 regardless of his actual character level. To make the toughness equal for both plates, PvP mode uses the Glicko2 matchmaking rating (MMR) system to find players of the same skill level. You must complete map-based objectives, capture areas, and kill your enemies to win.

This hybrid mode has the best aspects of both PvE and PvP, giving you the best of both modes. On each map, dozens of players gear up to give a tough time to other players. With five huge maps, you can have siege weapons. To score higher, you must capture the towers of the enemy.

In WvW mode, the level of your equipment will be the same as in regular mode. This might give you a dent if you face an enemy with more equipment level.

Are buying expansions worth spending the money?

After very successful sales, the developer made the core part of the game free for all. You need to pay for the expansions and DLCs, though. Going straight to buying expansion packs would be a bad idea. One must try the core game first, and if the interest develops, you can buy an expansion pack.

Gamers have loved and welcomed the expansion packs as they give you an exciting gaming environment. With expansion packs, you get the chance to explore your character’s personal story. With expansions, you can use map chat, for which you had to wait 30 seconds in the free version.

No restriction for trading in the expansions is another exciting feature. There are currently three expansion packs titled Heart of thorns (2015), Path of fire (2017), and End of dragons (2022). The developers are working on a fourth expansion that is expected to be available for playing soon.

The End of Dragons has won an award. Every expansion introduces a new region, and this expansion is no different in this regard. There were nine new elite skills added.

Games, where we make an alliance to battle a common enemy, excite most of us, and why would they not? Gathering and uniting warriors from different races and cultures that are always at each other’s throats is an exciting experience. Guild Wars 2 is based on the same theme. After the disbandment of the original guild, a new guild had to be made to fight the enemy, the Elder Dragons. Guild Wars 2 is an exciting game with many expansion packs and different arenas with many playing modes. The game has gained huge acceptance from the game fans. There is no doubt that Guild Wars 2 is indeed a good MMORPG game to play.