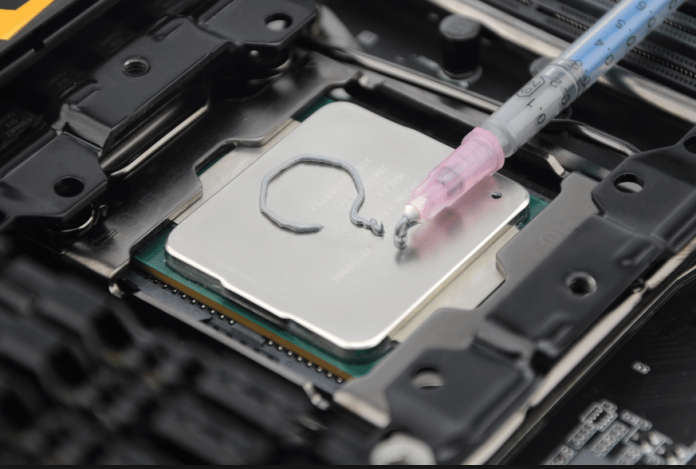 Is your CPU or GPU heating up at an unusual rate? It may be time to reapply the thermal paste. Regardless of your experience building computers, you must know when to change the thermal paste. Here, we have discussed how long does thermal paste last so that you can change it in a timely manner.

You have seen how the heat sink is firmly pressed up against the chip. Though there appears to be a tight seal, tiny air bubbles are present. Air also prevents heat transfer between the two since they are insulators.

Thermal paste is necessary because the tiny air pockets that trap the heat cause the CPU to become hotter gradually.

A thermal paste is a heat conductor that fills the air gaps between the processor and heat sink to create an airtight seal that enables effective heat transmission.

The thermal’s efficiency decreases with time as it dries up and gets more stale. The CPU becomes feverish due to the dried-out thermal paste’s inability to transfer heat. You should periodically reapply the thermal paste to prevent the computer from overheating.

How Long Does Thermal Paste Last Inside the Tube?

Depending on the circumstances, Thermal Paste within the tube should last one to two years. It can even endure several more years when kept in an airtight, dry, and cool location.

In addition, the quality and materials used in their production can affect the life expectancy of thermal paste. However, using a thermal paste that is more than five years old is not advised.

How Long Does it Last on Devices?

The lifespan of thermal paste on your CPU, GPU, or other chip is between two and four years. Depending on the cooling system, weather, usage, and material quality, the thermal paste’s lifespan might range from two to ten years.

Your CPU and GPU may become overheated if your PC is almost always overheating, which will reduce the conductivity of the thermal paste. Additionally, playing high graphic games and overclocking your computer can generate more heat than usual. This can significantly shorten the lifespan of thermal paste.

Be careful that the thermal paste will only last one or two years if your computer is on nonstop.

Quality of the Thermal Paste

Thermal paste of inferior quality will perform poorly. You will need to replace the paste more frequently than necessary since it will lose it’s thermal connection sooner than you anticipate.

The lifespan of the thermal paste may also be affected by dust buildup. A buildup of dust on your heatsink may prevent it from effectively cooling your CPU.

When Should You Reapply Thermal Paste?

It could be time to reapply the thermal paste if the CPU or GPU temperature is unusually high or the PC isn’t operating as effectively as it should.

However, the CPU and other components may become overheated due to dust buildup on the heatsink fan. Therefore, it is advised to clear the heat sink’s dust before turning the device back on. If the overheating persists, the processor requires a new thermal paste covering.

After removing the heat sink, the thermal pasting won’t function for any reason. Thus, if you remove the heatsink from the processor in any way, you must first remove the old coating of thermal paste from the chip and then coat it with a new thermal paste.

When applied correctly and in the recommended quantities, thermal paste functions as an efficient thermal conductor. Therefore, your CPU may cool down by two to three degrees.

Keep in mind that using extra thermal paste really has a negative effect. The motherboard may overheat if it leaks out from the sides.

To start, use a pea-sized amount and spread it with a thermal spreader.