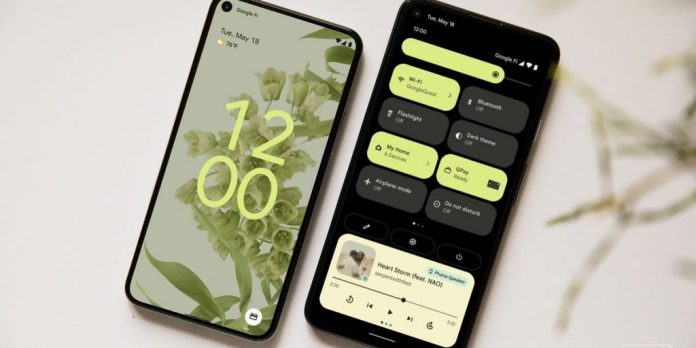 Android 12 brings many changes as compared to its predecessor and most of these changes are UI changes, design changes, and under the hood improvements.

In Android 12 there is a new internet toggle in the quick settings panel which replaces the Wi-Fi and mobile data toggles present in the previous versions that many of you all were used to.

In this article, we will give you a tutorial on how to get back that Wi-Fi and mobile data toggle, and the best part is that it does not require root access.

It seems like users have to go through another tap to enable Wi-Fi or mobile data services. Many had hoped that this change would have been reverted before the stable release of Android 12 but that does not seem to be the case.

Google has also responded to this situation and given its reasoning behind the change. The company says that they have done user studies and that they have shown most people enable Wi-Fi to force a connection to mobile data. As a result, Google says that many people simply forget to enable Wi-Fi back on. This has resulted in excess mobile data usage and this change in Android 12 is a way to work around this common issue for users.

Now, whether those user studies relate to you or not Google seems to have forced this new toggle on all users. But there is a way to get these toggles back and again this does not require root access but the process requires an ADB command.

You need a PC to install ADB and fast boot program and then connect your device with the PC via USB cable.

To download and install the ADB and fast boot program, open this link. It is an XDA thread link of the developer of the program.

Scroll down at the bottom of the page until you see Downloads and click on “Installer” under the downloads.

Once you download the program, you should get a .exe file like other windows software and tools.

Double click on the .exe ADB file that you just downloaded and install the program just like other programs on Windows.

So, once you have ADB and a fast boot tool set up on your PC, you have to connect your phone with a USB cable to your PC.

Open the ADB and fast boot tool you just installed on your PC. If you create a shortcut of the tool on your desktop while installing it, you can use that to open the tool.

When you open the tool a command prompt will open in the same folder where you install the ADB and fast boot tool.

The command prompt or terminal or Windows PowerShell needs to be opened in the same folder as your ADB and fast boot tools files.

So, we have our Android 12 device connected to the PC right with the USB cable. We are going to test that connection with the ADB device command.

Type adb device in the command prompt and hit enter. If your device is not listed then make sure that you have USB debugging mode enable and then run that command again.

You will continue running this adb devices command until you make sure that you have a device registered with that USB cable.

Make sure to check that this command is correct when you paste it or type it in the command prompt.

so again, you can either type all of that out or you can copy and paste it with a right-click and then again go back and make sure all of the letters and symbols are correct.

With that done just press the enter on the keyboard and it should simply bring you down into another adb shell prompt.

You shouldn’t get an error message or a success message it should just bring you back to another shell prompt.

Now, we can come back to the phone open the quick settings panel. This time we have a Wi-Fi toggle, mobile data toggle, and an internet toggle separately.

Internet toggle still works the same as before but the wi-fi toggle works as you would expect.

We have tested all of this on our Google Pixel 4a and we are hoping that this whole process will work on other older pixel devices that have been upgraded to Android 12.

We have also heard that this process is not working if you have done a clean install of Android 12.

This trick may only work if you have updated from Android 11 to Android 12. However, we are also seeing people with a Google Pixel 6 device saying that this worked for them.

How to Pass SafetyNet on Rooted Pixel 6 and 6 Pro

How To Root Asus ZenFone 8 Z3590KS Magisk Without TWRP