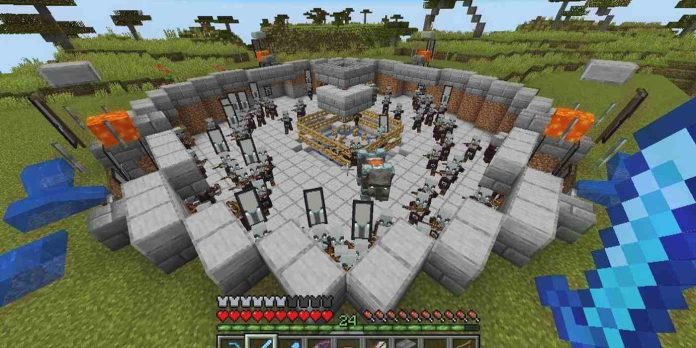 To collect XP in Minecraft is a very vital task. It allows the players to use the best enhancement of Minecraft, get extra credit on a few Minecraft survival servers, and level up in this game. But, increasing your XP is not at all an easy task. Fortunately, if you are aware of making the mob farm in Minecraft, you can easily receive XP. To get started with a mob farm, all you need is a little bit of planning and some basic stuff. When it is ready, you will be ready to syndicate the mob farm with your best Minecraft house ideas for free boosts.

Moreover, with mob traps, the farms can be used for improving Minecraft adventure maps. Let us move forward and learn to build a mob farm in Minecraft easily. Various plans and segments are involved in the making of Minecraft mob farm. In this guide, we have suggested some best locations for building mob farms and included some variations of mob farms.

Minecraft mob farms depend directly upon the players and a dark environment to mob spawn. You will need the following:

The player must remain within some hundred blocks of the spawn area.

For the hostile mobs, the farm needs total darkness for them to spawn effectively

area must be large enough to store, spawn, and move the mobs. Normally, a single chunk is enough

If players plan biome-exclusive mobs such as Nether mobs, the farm has to be in the dimension or biome

If the mob farm is very much deep in the ground and very much high in the sky, there is a probability that it can become ineffective while exploring new nearby areas. So, we would suggest the best place to make mob farms in the region under the ocean. This is because this area is dark enough for the mobs to spawn anytime. For easier exploration, you can also mine caves and build safe houses. Alternatively, you can even build your Minecraft mob that is buried some few blocks under the ground. This location is quite easier for exploring Minecraft ores in the caves by not compromising the functionality of the farm.

The most famous and traditional way of collecting items is to use a hopper. You have to make a floor with various hoppers where the mobs are seen dying. Then, if a chest is put beneath the hoppers, the items dropped will pass automatically through the hopper, and these will be collected in the chests. Now, if you wish to sort the dropped items automatically, a hopper can be used for that. To do this, a hopper’s four out of five cells must be filled with random blocks. Then in the remaining cell, the item you wish to collect has to be placed. If the mob drops that item, it will be collected and then stacked in the hopper. In the meantime, the hopper will ignore the rest of the dropped items.

A Minecraft mob farm will be created, some blocks high in the sky with a sophisticated collection system on-ground. You will require the following items for making the tower mob farm:

Creating a collection area for the Mob farm

Foremost, a small hole must be dug in the ground to get started, and four chests must be placed in it. You can make it as deep as you wish, but it has to be treated as the base point for the remaining structure. On the top of every chest, a hopper has to be placed. Around this structure, a boundary has to be made using slabs. The top portion of the slab has to be empty.

To make the tower, a 4x4square wall has to be created on the topmost part of the slobs you previously used to make the boundary. You must ensure that the slab is left open above the existing slab. The structure has to be extended up to a level of 22 blocks in height. Next, the structure on top has to be expanded into a cross-shape to make bridges of breadth 2 blocks on all the sides of the structure. The bridges have to be stretched out to 7 blocks. When the four bridges are prepared, a two-block tall boundary has to be created around them. Now, to create a floor-like structure, these walls have to be connected, making the existing bridges look like tunnels.

When the bridges are connected, a new two-block boundary has to be created all over the structure. If you wish that your mob farm will work during the daytime also, you have to prepare a roof on the structure’s top to get a permanent dark environment. Light sources can also be put on the rooftop so mobs cannot spawn there. Finally, the bridges have to be flooded with water by keeping water blocks on the bottom edges only. Then, on the top of the bridge area, the closed trapdoors have to be placed to make it easier for all the mobs to fall inside the tunnel. Your mob chamber is ready now.

You may not like to use darkness for spawning mobs. Then you may depend on mob Spawners to generate mobs you wish to kill and then collect the items they dropped. Monster Spawner is a functional block that basically spawns some hostile mobs. For using it on the farm, you have to ensure that the water collection area is exactly beneath the Spawner. So, all the mobs will fall into the system or get pushed slowly into the tower with the water flow. You can even expand the water stream because you will not require most of the area.

The above-mentioned mob farm will allow the players to farm XP and easily monster. Mob Farm is quite easy to build and does not need many resources, unlike any other farm. You can try this technique and build Minecraft a bit easier for you.