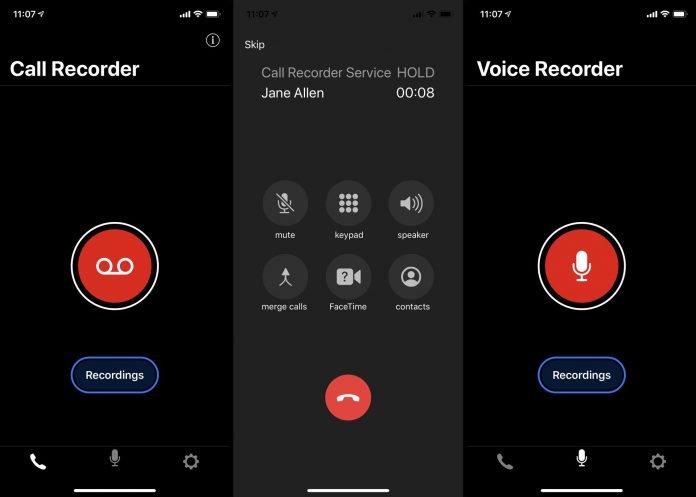 We have shared here some methods using which you can record phone calls on your iPhone.

Methods To Record Phone Calls On Your iPhone:

This method makes use of an app that allows you to record phone calls. The most suitable app for this is TapeACall which works as a subscription service. Once you purchase the subscription, you have to use the app to merge the calls, which are then recorded and saved on the server of TapeACall. For incoming calls, you have to place the caller on hold to merge the local access number of TapeACall. For outgoing calls, you first call the number from the TapeACall app, then add the person on the call, and finally merge both calls.

Once your call is over, you can access the recordings within the app, which can also be shared as an MP3 file or a public URL. While it is a convoluted method of recording, all other recording apps work similarly.

If you can get your iPhone jailbroken or have one already, you can purchase a Cydia or hAcx tweak that automatically records calls. The default feature of the app allows you to record all phone calls, although you can whitelist particular contacts whose calls you want to record. This tweak is one of the easiest ways to record calls of all the methods available. Sharing of recorded calls is easy as the tweak lets you transcribe recordings. The only disadvantage of this method is that it works only on jailbroken iPhones.

Google Voice is another suitable option to record phone calls on an iPhone without any subscription fees. There is a small catch to it – only incoming calls can be recorded using the Google Voice app. A major flaw of this method is that the caller will be notified by the app as soon as you start the recording, even if the call is muted.

The advantages of using this app far outweigh the downsides. For example, to initiate or stop a call recording, you need to tap on “4” in the keypad of your app. Additionally, the recordings are available for listening on the Voicemail page of the Google Voice app. This app is great for recording work-related or business calls and is completely free to use.

If you have access to a Mac, QuickTime Player can record the calls on your iPhone. It even works with FaceTime calls, but you can not use headphones or earphones to record calls using this method. It only works if you are talking through the speaker of your phone. Also, answer the call using QuickTime Player instead of the iPhone.

The main concern with this method of recording calls is portability. This is because it won’t always be possible for you to have your Mac device with you at all times. Also, since this method works only when you are talking in speaker mode, you might face intrusion of your privacy.

If any of the above methods don’t work, you can revert to the most effective method using a voice recorder similar to the QuickTime Player method. Although it is a crude method, it is very effective as you don’t have to carry the Mac with you at all times. You will still need to talk on the speaker mode to record calls using this method.

As discussed above, there are multiple ways to record phone calls on an iPhone. You have to decide which works best for you.

How to Boot in Download Mode Xiaomi Redmi Note 10

How to Unlock Bootloader on Asus Zenfone 8 and 8 Flip

How To Set Up Multiple Desktops In Windows 11

iOS 15.2 Beta: How to Use the Hide My Email Feature in the Mail App

How To Change Quick Settings On Android 12

New Phishing Campaign Based on Omicron is Stealing PII of UK...