Screenshots let you capture exactly what you are seeing on your Android phone and then either save it or share it as a reference with others. An Android screenshot can help you with tutorials and several other tasks. It also saves data of your phone if you just take a screenshot of an image on the internet instead of downloading it. However, if you would like to save or share with someone just a part of a screenshot taken, then here is how you can go about it.

Taking a partial screenshot isn’t possible on an Android phone. However, once you have taken a screenshot, you can crop it and save or share it partially. Before that, you must take a screenshot of the entire screen and here is how you can do it.

Steps to take a screenshot on Android

The instructions to take a partial screenshot below will work for most Android phones.

Hold the Power button and Volume Down button together

All the recent Samsung phones (Note 3 and above/ S4 and above) let you take screenshot with the motion of your hand. But you must first enable the swipe feature in screenshot settings of Android.

Once you turn the feature on you will be able to take a screenshot with your palm. Keep your palm vertical on one side of your Android device and then swipe it to the other end to get a screenshot.

In both the methods of taking a screenshot depending on the Settings of their phone, users will get the option to edit and share the screenshot instantly. However, if you do not perform any action the screenshot is automatically saved in the Gallery for future reference.

How to Crop a Screenshot on Android Phone 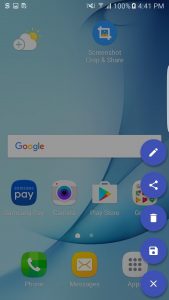 Once the desired screenshot has been saved in the Gallery you can crop the screenshot as you want.

Tap to expand the screenshot that you wish to edit

You can now use the cropped and visible partial screenshot to share or set it as your wallpaper or any other task that you would like.

Using a Third-Party App to Get Partial Screenshot

Using third-party apps such as Screen Master on your Android phone gives you more options when you are taking a screenshot.

You can save partial screenshots in various shapes of a specific part in square, rectangle, circle, etc. There are many more features they offer such as take screenshot by shaking your device, watermark, full-page screenshots by sharing the URL in the app, etc.

You can use any one of the methods mentioned above to take an Android screenshot and then crop it to get a partial screenshot.

How to Setup IPTV Extreme Pro app for PC in 2021