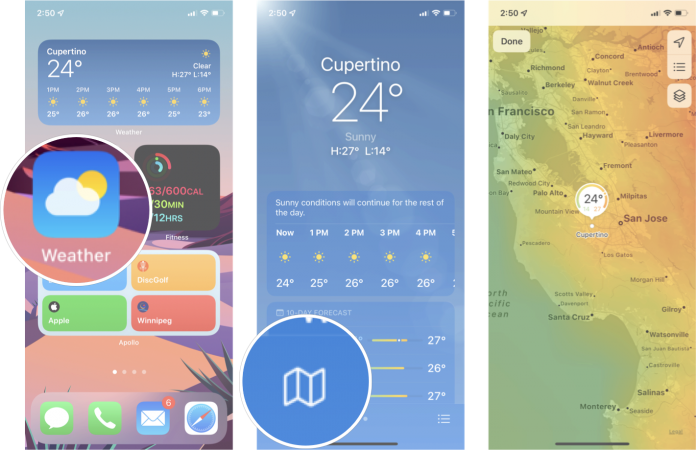 The Weather App of Apple has recently received a new design upgrade, and the iOS 15 has received a weather maps feature along with several other features in the app after Apple acquired Dark Sky.

Initially, Apple had a basic Weather app that was used by millions. On the other hand, Dark Sky was known to give accurate weather reports, especially within the United States. Apple has taken the best of both and combined them to give the users an incredibly useful Weather app.

The US, UK, and Ireland Apple users now have a specific feature known as air quality maps that the users are raving about. The feature will soon be added for other regions too. Here is how to use Apple’s new Weather maps:

Unlike the older version of the Weather app that could not forecast the exact weather for the next couple of hours, the latest Weather app in iOS 15 has been set to forecast in an hourly format. You will now be able to see a 10-day weather forecast with this recent upgrade.

The hourly forecast in iOS 15 is spaced out, allowing you to view two fewer hours while the remainder is clear. Furthermore, the long-range prediction, which formerly included a ten-day projection, has been lowered. The hourly forecast can be accessed without having to open the app.

The weather forecast will be done in animated form. There are unique animation combinations included in the app that will make it exciting and fun to use.

Weather Channel’s button that was initially located towards the bottom left hand side of the phone has been replaced by Apple’s new weather maps feature on the Weather app.

The information tiles have an upgraded look and will increase or decrease with the weather changes. The weather warnings will come with detailed information about the forecasted weather, like when or how stormy it will get.

The app provides a summary of the weather on top of your phone screen. Users can also see a bar that reveals the UV index and a graphic representation of sunrise and sunset timings. Also present on top is a compass which shows the direction of the wind in your area.

The AI-based app also notifies users of a sudden change in the weather. For instance, if it is about to rain, you will be notified with the precipitation notifications on a banner on your phone screen at the top.

These tweaks in the Weather app have made it even more useful and user-friendly. Download the latest iOS 15 to be able to use the new Weather app features on your iPhone.

iOS 15: How to Get Notified if You Leave Your AirPods Pro Behind

How to Record ProRes Video On iPhone 13 Pro

How to change text formatting in WhatsApp?

How to Cancel Apple TV Plus