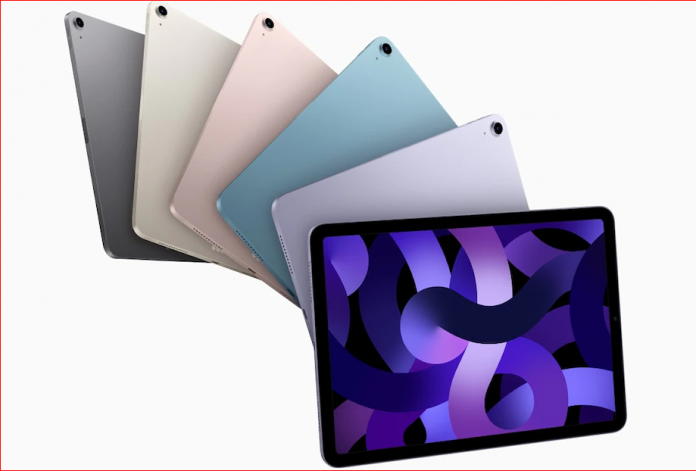 Along with the iPhone SE (2022), Apple launched a couple of products including The iPad Air (2022) at it’s peak performance event held virtually on 8th March 2022. Just like the iPhone SE (2022), the iPad Air (2022) also comes with the same design as it’s predecessor but with incremental updates under the hood. The major update includes the inclusion of Apple’s in-house M1 chip which also powered the iPad Pro models launched last year as well as Apple’s Mac computers and laptops. It is for the first time that Apple launched iPad Air with an M1 chipset at the helm.

It is the fifth generation of iPad Air which comes with the same design as it’s predecessor which was launched in 2020. It boasts the same 10.9-inch LED-backlit Liquid Retina display with 2360*1460 pixels resolution. This is the same display that came with the fourth-generation model launched in 2020. This display can reach up to 500 nits of peak brightness and offers P3 wide color gamut and true tone white balance. There is also a touch ID support inside the power button for fingerprint unlocking and security.

iPad Air (2022) is powered by Apple’s in-house octa-core M1 Chipset and 8GB of RAM. The base variant of this device comes with 64GB of internal storage. This M1 chipset offers 2x faster GPU performance and 60 times faster CPU performance as compared to the 2020 model. This chip is also equipped with Apple’s Neural Engine for AI (Artificial Intelligence) processing.

On the rear side is a single 12 MP wide-angle camera with f/1.8 aperture which is also similar to that of the 2020 model. This rear camera comes with features like Burst mode, Photo Geotagging, Smart HDR 3, Autofocus with Focus Pixels, Auto Image Stabilization, and Panorama mode. It can also record 4K videos at 24,25,30 and 60 frames per second (fps).

For video calling and selfies, there is a 12 MP ultra-wide selfie shooter with f/2.4 aperture that comes with a machine learning-backed center stage feature. This feature was first introduced in the iPad Pro variants last year and now it comes in this year’s iPad Air.

The company has included 2nd generation Apple pencil support in the iPad Air (2022) but users have to buy the Apple Pencil separately as it is not included in the box. On the battery front, the Cupertino giant claimed that this device will provide an all-day battery life to it’s users. The company added the 28.6 Wh lithium-polymer battery that delivers up to 10 hours of web browsing and video playback on Wi-Fi. There is also a Wi-Fi + cellular variant that can offer up to 9 hours of web browsing and video playback with this battery. The battery also supports fast charging and the company included the 20W USB Type-C fast charger in the box. It cost $599 for the base 64GB variant which is similar to that of the 2020 base variant.

Wikipedia has been blocked in Pakistan