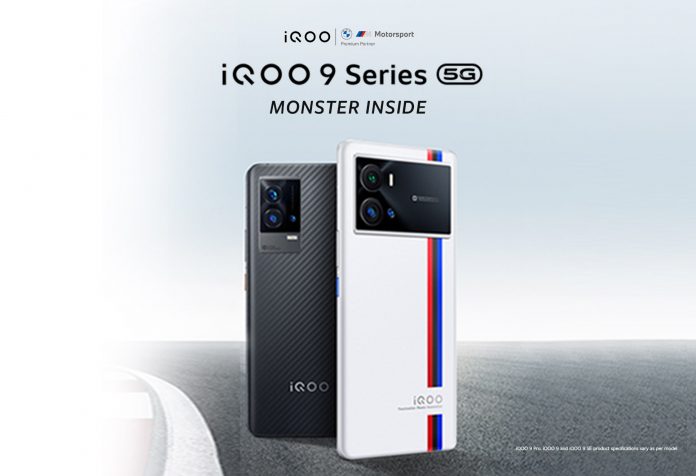 As announced earlier, the iQOO 9 series launched today in India with flagship-grade specifications. iQOO is Vivo gaming-centric sub-brand but the devices don’t look like the gaming device as they come with a nice simple and sleek design. The recently launched series consists of three devices i.e., iQOO 9, 9 Pro, and the 9 SE. The OEM launched these devices in partnership with BMW M Motorsport and the devices have BMW M Motorsport style three stripes on the back.

The iQOO 9 Pro is a successor of the iQOO 7 legend which launched last year and has a similar design and style at back.  The 9 Pro comes with a 6.78-inch 1440p OLED panel that supports a 120 Hz higher refresh rate and 1000 Hz touch sampling rate. The display can reach a maximum of 1500 nits of brightness.

It is a flagship device so it comes with the Qualcomm Snapdragon 8 Gen 1 chipset inside which is coupled with 12GB of LPDDR5 RAM and up to 256GB of UFS 3.1 internal storage. The rear side consists of three cameras which include a 50 MP Samsung ISOCELL GN5 primary sensor, a 50 MP ultra-wide sensor with a 150-degree field view, and a 16 MP telephoto lens. As it is a sub-brand of Vivo, the primary camera includes Gimbal stabilization and there are other camera features such as Portrait mode, Fisheye mode, and more. There is a 16 MP selfie camera at the top center of the display housed in a centered punch hole cut out.

The device also includes a 4700 mAh battery with a 120W fast charging support. It comes with FuntouchOS 12 based on Android 12 out of the box, an in-display fingerprint scanner, vapor cooling system, and dual stereo speaker.

The vanilla 9 model has few differences from it’s Pro siblings. The display specifications are almost similar except there is a slightly smaller 6.53-inch flat display. Instead of the Snapdragon 8 Gen 1 chipset, the vanilla model is powered by the last year’s flagship Qualcomm Snapdragon 888+ chipset coupled with up to 12GB of RAM and 256 GB of UFS 3.1 internal storage.

There is also a difference in the camera department. There is a 50 MP Samsung ISOCELL GN5 primary sensor just like the Pro model along with a 13 MP ultra-wide sensor and a 12 MP telephoto lens. On the front is the same 16 MP selfie camera placed in the same position as its bigger siblings. For battery, it has a slightly smaller 4350 mAh battery pack with the same 120W fast charging. 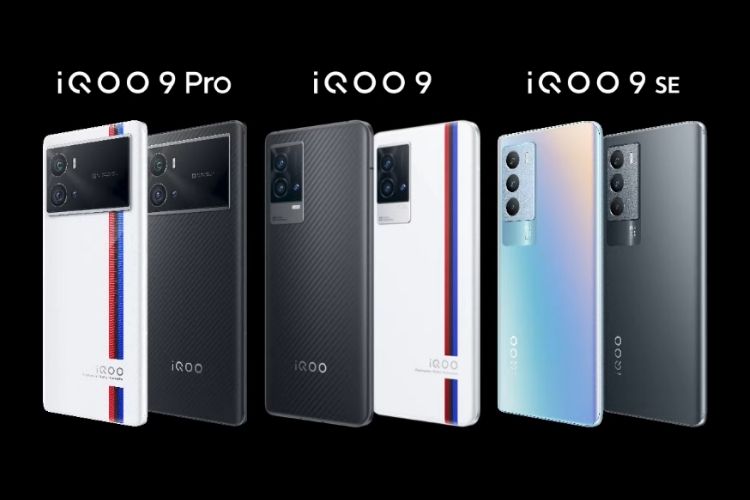 This is the third device in the series which is a water-down version of the 9 and the 9 Pro models. It features a 6.62-inch full HD+ OLED display with a higher 120 Hz refresh rate and is powered by Qualcomm Snapdragon 888 chipset. The device is available in two storage variants i.e., 8GB of RAM & 128GB of internal storage, and 12GB of RAM and 256GB of internal storage.

This device also comes with a triple rear camera setup which includes a 48 MP main sensor, 13 MP ultra-wide sensor, and a third Nano camera. It is powered by a 4500 mAh battery but with a 66W fast charging.