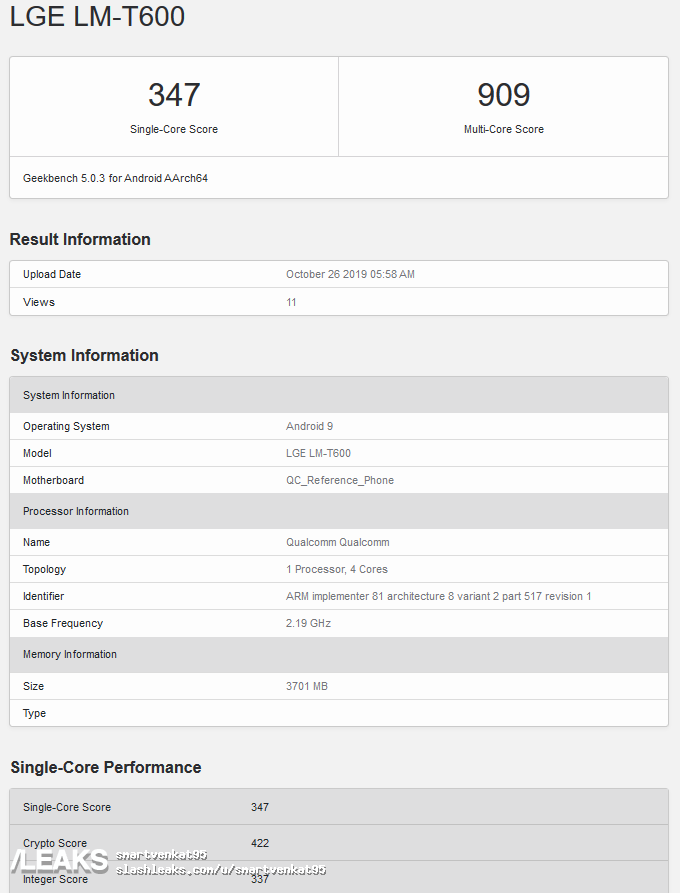 We here at GetTechMedia already know that LG is working to bring a new tablet – LG G Pad 5 after a few years. The tablet with model number LGE LM-T600 has been recently spotted on Geekbench benchmarking website revealing its few specifications. LG last launched a LG G Pad F2 8.0 under G Pad series back in the year 2017.

As per the GeekBench listing, LG’s upcoming G Pad 5 is powered by Qualcomm quad-core chip clocked at 2.19 GHz. It will have 4GB RAM and it will run on Android 9 Pie operating system out-of-the-box. The G Pad 5 scored 347 in single-core tests and 909 in multi-core tests.

Previous leaks have shown that the LG G Pad 5 has a 10.1-inch Full HD+ display with 1920 x 1200 pixels resolution and 16:10 aspect ratio. The tablet will come with 4GB RAM and 32GB storage but it is likely that there could be more storage variants as well.

Concerning the internals of the tablet, the tablet is said to be powered with Qualcomm Snapdragon 821 processor which is astonishing since this chipset from Qualcomm was launched about three years ago. LG G Pad 5 has hardware that’s inferior to the Galaxy Tab S4 2018, but is somewhat competitive with the Galaxy Tab S5e.

The tablet also supports LTE and fingerprint sensor but it will lack NFC. It is expected to run Android 9.0 Pie with LG’s own UX on top.

The LG G Pad 5 reportedly has a codename TF-10 and model number LM-T600L. The tablet has already received its Google Play certification which means it will be coming with Google apps and services.