After teasing it’s upcoming clamshell foldable Motorola Razr 3, the company confirmed another device with a 200 MP camera system. It will be the first device to launch with a 200 MP primary camera and will launch in July 2022. The company did not mention the exact launch date as of now.

The news again comes from the General Manager of Motorola Chen Jin who shared a teaser image on Weibo, confirming that a Motorola Device with a 200 MP camera will launch in July 2022. You can view his Weibo post where he revealed news about the upcoming device in July 2022 but he did not mention the exact launch date.

The said device has been in leaks previously and there were also some rumors that Motorola had been working on a device with Samsung-made 200 MP ISOCELL HP1 image sensor and 125W fast charging. Some images of the rumored device were also leaked in March 2022, hinting that the device is in development. 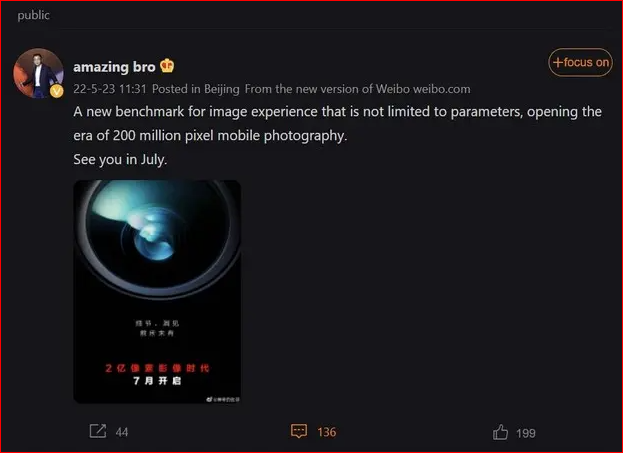 Apart from these two details, there is not much known about the said device as many things are still under wraps but it is said to be launched with flagship-grade specifications. Some early rumors hint that the device will launch with a 6.7-inch AMOLED display with 144 Hz fast refresh rate, 125W fast wired charging, and a newly announced Qualcomm Snapdragon 8 Plus Gen 1 chipset. These are just the rumored specifications as the company did not confirm these yet.

With the presence of a 200 MP camera system, the company will market the device as a camera-centric device and target users who do a lot of mobile photography and videography. This Samsung ISOCELL HP1 is equipped with the latest pixel binning technology which is called “ChameleonCell”. This ChameleonCell technology will provide high quality, accurate, and clear images irrespective of the lightning. This camera lens also supports 8K video recording at 30 frames per second.

The device will most probably have a triple rear camera setup. The primary camera is a 200 MP Samsung ISOCELL HP1 sensor while the other two sensors are a 50 MP ultra-wide sensor and a 12 MP telephoto lens. The device will also feature a 60 MP selfie camera for selfies and video recording. Motorola will launch the device in China first before launching it in global markets.