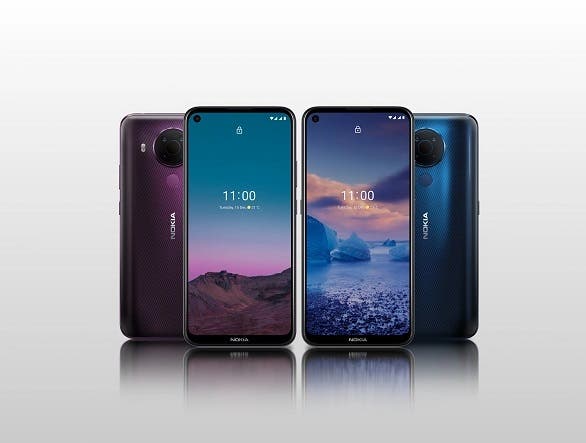 Nokia 5.4 is announced as a mid-range device. Nokia continues to bring more devices for the mid-range segments. Today the company brings another mid-ranger with the name Nokia 5.4.

HMD Global which manufactures Nokia devices has made a lot of effort with Nokia to compete with the Chinese brand in the mid-range sector.

A few months back, HMD also launched two budget devices with the name Nokia 2.4 and Nokia 3.4. Both these devices are entry-level devices with decent specs and low cost.

Now, the company announced a mid-range device Nokia 5.4. It is a successor to the Nokia 5.3 launched last year. The device announced today comes with decent specs such as Snapdragon 662, modern punch-hole design, and a 4000 mAh battery.

It comes with a display size of 6.39-inch IPS display with a resolution of 720*1200. It has an aspect ratio of 20:9 with the protection of a 2.5D curved glass display. The display has a modern look and trend with the punch hole cut-out on the top left corner.

It is powered by the octa-core Qualcomm Snapdragon 662 which is an 11nm fabrication based chipset. It has four cores built on 2GHz Kryo 260 and the other four cores are built on 1.8GHz Kryo 260. Along with the CPU is Adreno 610 GPU which handles all the graphics intensive task

It has a quad-camera setup on the rear side with a circular camera module. There is a 48-megapixels main sensor with 5-megapixel wide-angle sensor, a 2-megapixel depth sensor, and a 2-megapixel macro lens. In the center of the camera module is the LED flashlight. On the front is the 16-megapixel selfie camera which sits in the punch-hole cut-out on the top left of the display.

It has a battery of 4000 mAh which also supports 10W fast charging. As all the Nokia devices are part of the Android One program and this one is no different. Android one program is also the main USP of Nokia devices. It comes with Android 10 out of the box and will be updated to Android 11 soon. With Android One the company promises two years of major software updates and three years of security updates. This device will also get all the promised updates.

It is a mid-range device and comes at a decent cost. It starts at $230 or €189 in Europe. It is currently available for sale in Europe and there is no confirmation of this device coming to other markets. However, HMD will definitely launch the device in major markets like India and China in the coming months.