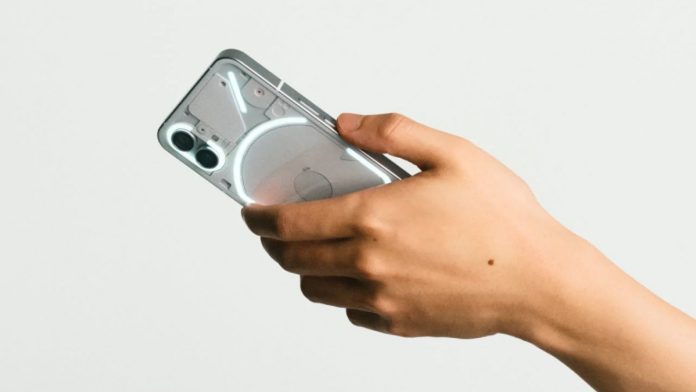 Starting up with the display, the all-new Nothing Phone (1) has a 6.55″ OLED panel with 1080 × 2400p resolution, supporting 120Hz refresh rate, 240Hz touch sampling rate, and 1200 nits of peak brightness. With a recycled aluminum frame and Gorilla Glass 5 protecting the display, it has symmetrical bezels on all four sides.

It's pure instinct. Formed as a machine. Told through beautiful symbols. Deeper interactions. And brave simplicity.

Discover more about the Glyph Interface and Nothing OS at https://t.co/WAZe9Avh0J pic.twitter.com/3OHNM5TxZh

It’s got a 4,500 mAh battery with 33W fast wired charging (juicing the battery to complete in 70 minutes), 15W wireless charging, and a 5W reverse wireless charging. Nothing follows the suit of Apple in not packing an adaptor in the box and selling it separately for €35 / £35 – for the 45W model.

It runs on Android 12-based Nothing OS (1), which the company says isn’t much of bloatware. It comes with only Android apps by default and promises three years of Android updates and four years of security patches every two months.

Well, the most unique feature of Nothing Phone (1), also could be the USP – is the transparency on the back with “Glyph interface” LEDs. These are placed right next to functional areas of the phone, so they show off when needed.

For example, these lights can act as progress indicators when charging, camera lights, and even sync with the built-in ringtones. We shall see more in the coming days. This new phone comes in three storage variants, and is priced as below;

It’ll first show up at a Nothing pop-up kiosk in Covent Garden in London, on July 16 at 10 AM local time, and will be available there for five days. Also, it’ll be sold through partner retailers in limited stocks starting July 18, followed by the first official sale on July 21 via the Nothing website and at partners globally.