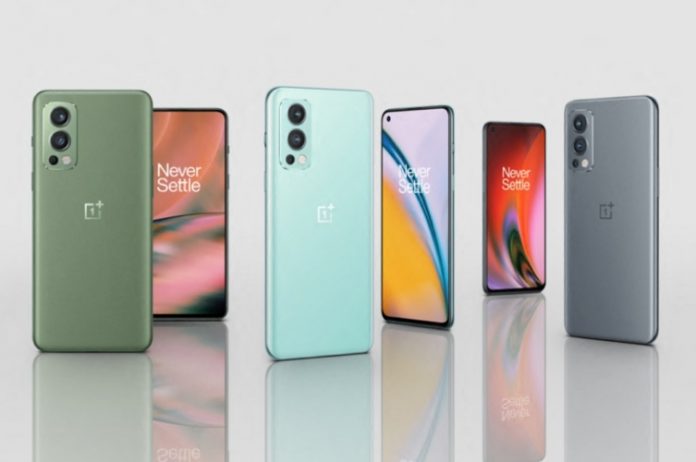 The successor is OnePlus Nord 2 5G and has the company’s famous tagline “Flagship Killer”. It is a 5G smartphone that comes with the MediaTek flagship chipset at an affordable price.

The design of this newly launched smartphone is similar to this year’s OnePlus 9R. It comes with a 6.34-inch AMOLED flat display with a punch hole on the top left corner. In addition, there is a support of a 90 Hz higher refresh rate and FHD+ resolution. This AMOLED display has 1080*2400 pixel resolution and a 409 PPI density.

The punch hole cut-out on the top left corner carries the 32 MP single selfie camera with an f/2.5 aperture.

On the rear side is the triple camera placed in a vertical arrangement similar to the OnePlus 9R. The primary camera has a 50 MP lens with an f/1.9 aperture. There is also an 8 MP ultra-wide lens with f/2.3 aperture and a 2 MP macro lens with f/2.4 aperture.

OnePlus Nord 2 will be available in three colour options, i.e. Green Woods, Blue Haze and Gray Sierra. The latter two-colour option has a shiny back panel.

Last year’s NORD came with the Qualcomm Snapdragon chipset. But this year, the company opts for the MediaTek flagship chipset Dimensity 1200 SoC with AI capabilities. MediaTek Dimensity 1200 SoC is the best chipset from Taiwanese Chipmaker till now.

The company claims that they have implemented AI to make the device performance more efficient. With AI, there has been improved camera quality, Display performance, RAM management and battery timing.

There is a decent 4500 mAh battery cell in the device charged with a massive 65W wrap charging. The 65W Wrap Charger can charge from 1% to 100% within 30 minutes, as the device maker claims.

The rest of the specifications are pretty similar to other mid-range and upper mid-range devices. There is a Wi-Fi 6, under-display fingerprint scanner, Bluetooth 5.2, USB Type-C port and NFC.