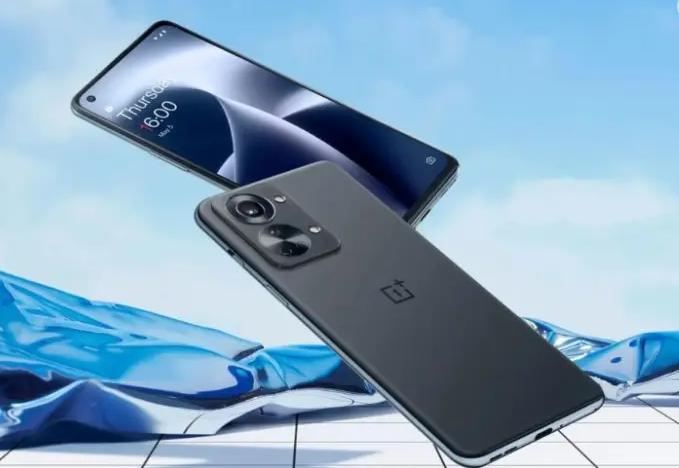 OnePlus Nord 2T launched today in India after being initially teased by the company earlier. This device has been launched in Europe earlier and now it is finally making it’s way to the Indian Market. It is the successor of last year’s OnePlus Nord 2 which is a good mid-range smartphone considering it’s price. Let’s have a detailed look at the specification of this device.

From the looks, there are some changes made on the rear side of the device as compared to it’s predecessor. Now, there is a vertical camera module that has a big circular camera housing for the camera setup and the LED flashlight. The device is available in two color options that are Gray Shadow, and Jade Green.

There is a 6.43-inch full HD+ AMOLED display with 1080*2400 pixels resolution. This display has a 90 Hz refresh rate, supports HDR10+, and is protected by Corning Gorilla Glass 5. On the top left corner of the device is a 32 MP selfie shooter housed in a punch-hole cutout. Under the hood is the MediaTek Dimensity 1300 SoC which is based on 6nm fabrication. The chipset is also a successor of MediaTek Dimensity 1200 which was used in Nord 2 that launched last year. The chipset is paired with up to 12GB of LPDDR4x RAM and up to 256GB of UFS 3.1 storage.

On the rear side is a triple camera setup that includes a 50 MP Sony IMX 766 main sensor with optical image stabilization and comes with an f/1.8 aperture. The main camera is supported by an 8 MP ultra-wide sensor, and a 2 MP monochrome sensor with an f/2.2 aperture. OnePlus included camera features like Portrait mode, AI scene enhancement, 1080p videos, Dual-view photos, Nightscape mode, and more.

OnePlus Nord 2T runs on OxygenOS 12.1 on top of Android 12 out of the box. It is equipped with a 4500 mAh battery cell that supports 80W SuperVOOC fast charging which is an increase from the 67W that comes with its predecessor. Other specifications include USD Type-C connectivity, 5G, NFC, an in-display fingerprint scanner, and all the sensors.