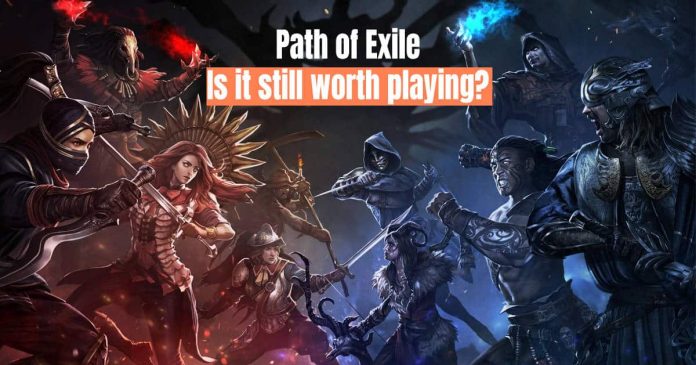 If you are a gaming enthusiast, this article is for you. Grab your PC, unbox your Xbox or move to your PlayStation. Because here, we will review one of the most famous RPG games, Path of Exile.

First, we will understand RPGs. Role-playing games are those in which gamers act as the games’ characters. They attain the fictional character in the fictional settings of the game. This sounds interesting!!

Players either control the characters or are assigned as an instructor in these games. They might take part in the decision-making process in the game. These games are power-packed and full of action. RPGs are very famous in the gaming community.

Your character’s strengths increases as you move ahead in a role-playing game. There is a development of the characteristics as well. Each player has an extensive inventory. Different guns, bombs, and other weapons become the companion of your character. Apart from this, the game plot is a crucial factor in the case of RPGs.

RPGs are also of different types. TRPG (Tabletop RPG) in which the game is discussed. Whereas in LARPG (Live Action RPG), the gamers play in the game and control their respective characters. In any form, a game master is there who makes decisions about the rules and settings of the game.

Path Of Exile is a very popular action role-playing game. This game is somewhat like Diablo. Grinding Gear Games developed it. It has both single and multiplayer modes.

Grinding Gear Games initially launched the game in 2013 for Microsoft Windows. As the game garnered popularity, it was launched on other platforms. Gamers witnessed it on Xbox One in 2017 and PlayStation 4 in 2019. Recently, in 2020 the game was available to Mac OS users too.

The story revolves around the continent of Wraeclast, as mentioned earlier. Wraeclast is a cursed territory. The government of island Oriath are villains in it. They have exiled people in the dark fantasy world, Wraeclast. This place was home to many gods and goddesses.

The game has different leagues—the regular league, which defines itself. There is an Ancestral league in which, in addition to devils, ancient pictographs, idols, and totems exist. In Turbo league, the difficulty level takes a new height. In this league, the power of monsters increases to a whopping 60% more than usual.

For playing the game, gamers can choose among the seven characters of the game. These characters are Ranger, Shadow, Duelist, Witch, Marauder, Templar, and Scion. All you need to move ahead in this game is to navigate to Oriath. En route, the real thrill begins. Players must defeat all the devils they encounter and survive throughout the game.

Why Choose Path Of Exile?

The game is nerve-pumping with it’s well-animated character, eye-catching visuals, and fantastic storyline. The game’s plot makes the newbies try their hand at it. Developers made the storyline that it attracts both a noob and a pro-amateur RPG player. The game is highly interactive, and there is no doubt about it.

The game is quite exciting, and it will not bore you. In starting, the simplicity of the game makes it enjoyable. As the game moves ahead, the complexity instills a bone-chilling effect in the gamers to put their mind and soul into the game. At this point, this game makes a cutting-edge difference from other action RPGs.

Playing this game is not about blood-shedding and defeating your enemies, it is more than that. You can build a zoo, not a zoo but a monster zoo. Players can also make personal hideouts. Moreover, you can skip all this. Start afresh, create a new world with your own rules and some unexpected paths!! Games should surprise you at each step. That’s where Path of Exile does full justice. It does when we say it stands apart from the other action RPGs.

Once you’re done with a job, sit? No!! You can take a new flight and move up by increasing the level. Take on a new enemy by mapping your path. By embarking on every new journey in this game, you upgrade yourself. Upgradation in your character, in weapons, and encountering new characters to engage.

The character of the game itself turns from a seedling to a tree. This shows the game’s progression, which never bores the player. It shows how much the character has worked on it’s ability.

The game’s exotic builds instill gamers’ energy to go for them. But it is not that easy. To get access to more challenging sites, you have to fight.

Over the years, classes have been introduced in these builds. In each class, there are subclasses too. There are three subclasses, but the character Scion gets an extra. This character has the competency to take skills from the other characters.

This game is free, and you don’t need to spend a penny on it. Free games create no obstructions for the players. There are no premium weapons. Players can acquire all the top-class weapons as they play the game. You can spend a few bucks to adore your gaming experience, but it is totally up to you. You can buy pets who will run with you. You can also purchase a premium stash if you need it.

Premium access to weapons and locations is needed in many games after a few levels. But this is not a must in the case of Path of Exile. You can earn them as you boost the skills of your character.

No game can win hearts without being experimented on different levels. Path of Exile proves it. The game’s developers have experimented a lot, trying to detect and pinpoint vulnerability and solving it each time. With continuous changes overtime, the game became one of the best action RPGs.

Shortcomings Of Path Of Exile

As the game is entirely free, it lacks many points.

At some stages, you will find that your weapons are impotent to fight with your enemy. At this time, you have no option but to buy some premium weapons. This makes the mission a bit difficult and sometimes complicated. Your skills, when put forward carefully, might help at this stage.

Bugs and crashes are common in the game. The graphics of the game can deter your enthusiasm while playing the game. Due to the fog in the game, it becomes difficult to see. It also becomes challenging for the gamers to move ahead.

Maps take time while loading. Sometimes the glitches in the game might result in the unfair death of your characters.

Here we have seen how the game Path of Exile is standing apart. The game is powerfully packed with a fascinating story. Some of it’s features are very hard to find in any RPG. At this point, this game moves ahead and leaves it’s mark. The whole game is influential, and it will attract the masses.

Yes, the game lacks at some points, which we expect will be taken care of in the future. By remembering the growing competition in the industry, the developers are already working on it.