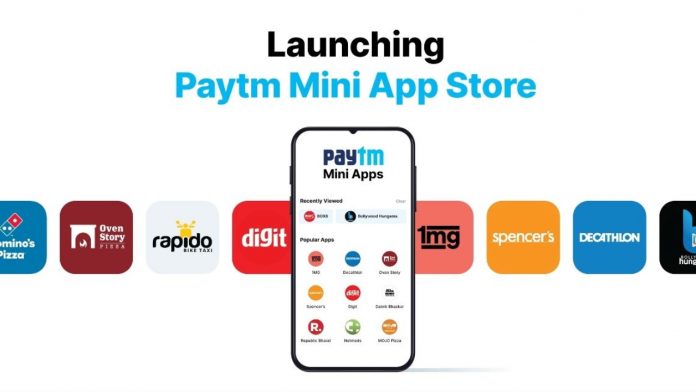 Paytm India’s biggest E-payment gateway launches its own app store called Paytm Mini App store. It is competing with Google Play Store and is only focused on the Indian Apps. The newly launched app store already has a listing of the top Indian apps. According to Paytm, they will be adding 300 apps in the coming days.

The app store isn’t as mature as Google’s Play Store or Apple’s App Store. Users won’t be able to download or install any app from the Paytm Mini App Store. The App store will open the app in a small window where users can only use HTML or JavaScript as of now.

Paytm also offers the developers access to its core services such as wallet, UPI and payment bank account. Currently, all the Paytm services are free to the developers and only 2% will be charged on the use of credit cards.

Google and Apple both charged 30% from the developers and if compared with this it is a great deal to all the developers. Indian developers already criticize Google and are concerned about the dominance of the search engine giant in the country. They already proposed the idea of an Indian App Store to the Government.

Currently, the Paytm app store offers apps like Decathlon, Domino’s Pizza, FreshMenu, Netmeds, NoBroker, Ola, and more. Users can access the app store from the Paytm main app and have been in work for the past two months.

Last month Google removed Paytm from the Play Store as the app violated agreement over gambling restrictions. The payment app stood against Google and said that it didn’t violate any agreement.

After the criticism, Google restored the app again on the play store and imposed a 30% commission on every in-app purchase.

On the other hand, the experts say that this app store is technically wrong. Basically, the payment company is opening an app within its existing app. Expert isn’t calling it an app store as it doesn’t have an independent app and doesn’t have a uniform distribution.

It sounds like the company has changed the name of its Paytm Mini Program to Mini App Store.
(Source)