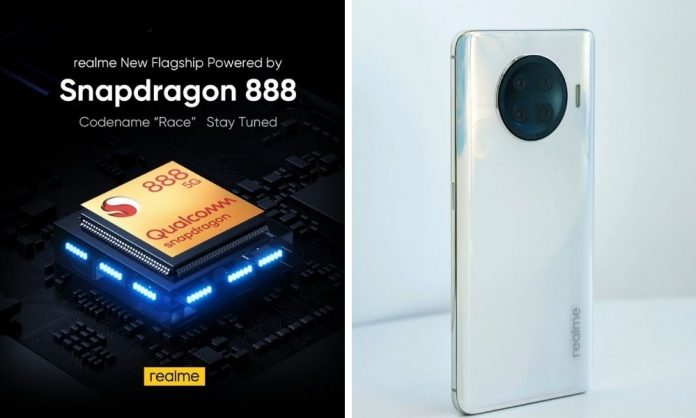 Realme Race will come with the latest Qualcomm Snapdragon 888 chipset, the company announced. This announcement comes right after the Qualcomm Tech summit ended.

The name company decided for its next flagship is “Race”. Realme claims that this codename reflects the speed and high performance.

“Qualcomm has always been one of Realme’s most important partners. Realme has already started the development of “Race” a few months ago, and will once again deliver a product that will exceed the expectations of users around the world.”

Realme gained so much popularity in just two years. Since its launch in 2018, it has become the fastest brand to hit a milestone on 50 million units shipped. Realme worked very closely with the US chipmaker and has launched many devices with snapdragon SoC. The partnership between the two companies resulting in the launch of 4G and 5G smartphones globally.

This year also the Chinese OEM became the first manufacturer to launch a device with Qualcomm Snapdragon 865 and 765G. Realme X50 Pro 5G and X50 5G are the two devices to launch with 865 and 765G. Both these devices were a success in the global markets.

As Realme Race will feature a flagship chipset, it will come with the top of line specs. There is no news about the exact feature details of Realme Race apart from SD 888. But it is expected that the device will land with a pair of 12GB of RAM and 256GB of internal storage. It will also be the Realme’s first device to launch with Realme UI 2.0 on top of Android 11 out of the box.

Early render images of the device will give the hint about the design of the smartphone. There will be a quad-camera setup in a circular camera module. There are also rumors that it will launch with the 125W ultra dart fast charging. This is Realme’s own proprietary fast charging.

We will discuss more details when the device will go live in early 2021.