Redmi K50 series is in development and might come at the end of this year. Xiaomi’s Redmi brand launched the K20 series in May 2019 as the first Redmi branded flagship series. In November of the same year, Redmi launched K30 while in 2020 the company launched K30s with the flagship internals.

In March 2021, the company launched The K40 with the Qualcomm Snapdragon 870 SoC. Now the company is planning to expand its “K Series” lineup with the launch of Redmi K 50.

Also Read:
Samsung Galaxy S21 among the first devices to get the official Android 12 update

Xiaomi’s Vice President and Redmi’s General Manager Lu Weibing teased the Redmi K50 on its Weibo account. In a Weibo post, he asked about user’s expectations regarding the specifications and features of the upcoming device.

Popular Chinese tipster Digital Chat Station also tipped that Redmi K50 will bring many improvements compared to its predecessor. The most notable improvement will be in terms of fast charging, screen quality, and camera performance. 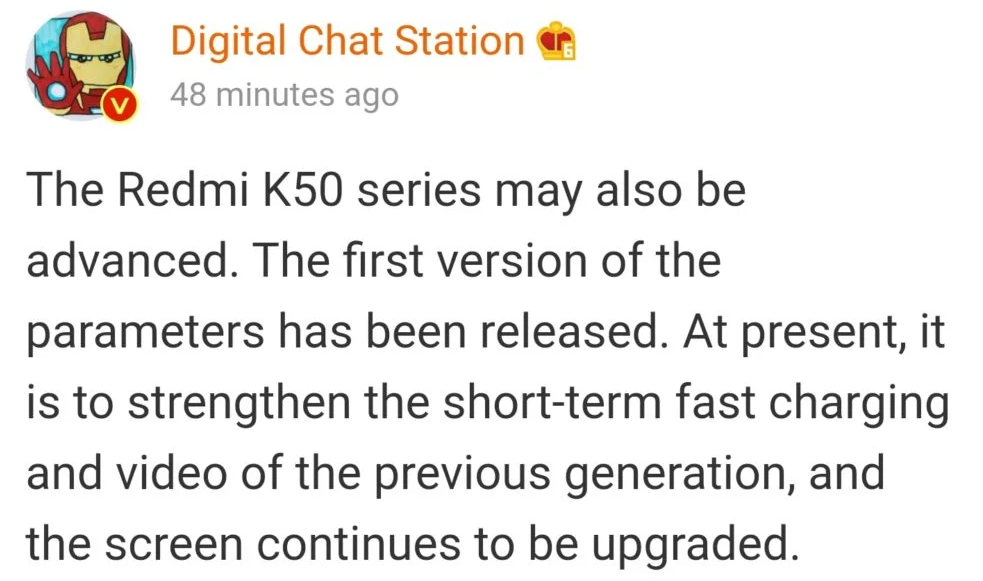 This year’s Redmi K40 came with a 33W fast charging so we might see 50W or maybe 65W fast charging in Redmi K50. At present, there is no confirmation yet from the Company’s as well as there is no leak about any features of the upcoming Redmi flagship.

Redmi also didn’t disclose any expected launch date of the device. But with the previous history of device launching, we expect to see the device launch before the end of the year.