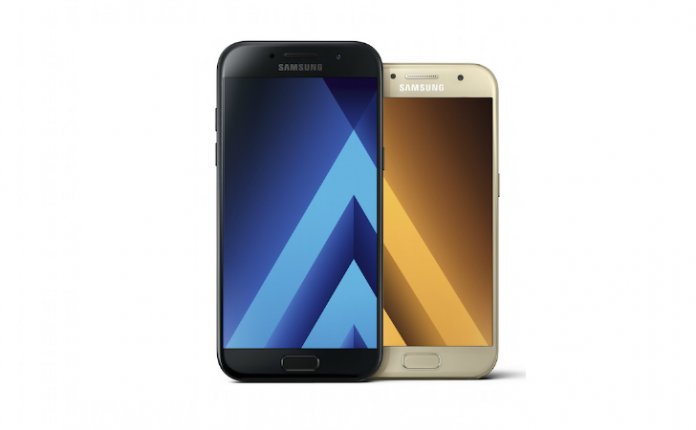 Waterproof features and cameras that are claimed to be superior factors.

Samsung officially announces the new family of the Galaxy A series for 2017, each model introduced is the Galaxy A3 (2017), Galaxy A5 (2017), and Galaxy A7 (2017). All three will target different market segments to be able to meet the needs of users.

This year’s Galaxy A is preening by presenting a premium design with a glass wrapper on the front and three-dimensional rear glass like the Galaxy Note 5 series, as well as being reinforced with a metal frame around the body of the cellphone. At first glance, the Galaxy A 2017 has more or less the curves that are similar to Samsung’s flagship last year, Galaxy S7. All three will be present in black, gold, peach and blue.

What’s interesting in this series is the presence of waterproof features for all models. Allows the user to not have to bother when operating the device in wet conditions such as rain.

Looking from the specifications side, each has a difference though not much. Starting with the Galaxy A7 2017, which offers a 5.7-inch Super AMOLED dimension screen, it is also strengthened with an eight-core 1.9 GHz processing chip and 3GB of RAM and 32GB of internal memory. The camera used is 16 megapixels both front and back. The last feature of this cellphone that has a 3600 mAh battery is the presence of Samsung Pay support which allows users to make instant payments using only a cellphone.

Turning to Galaxy A5 2017, this phone has specifications slightly below its older sibling Galaxy A7 2017. Which uses a 5.2 inch Super AMOLED screen, eight core chip chips with 1.6 GHz speed, 2GB RAM, 3000 mAh battery capacity , as well as other specifications similar to the Galaxy A7 2017

Finally for the Galaxy A3 2017, this phone is equipped with a 4.7-inch Super AMOLED screen, eight core processor as strong as 1.6 GHz, 2GB RAM, 16GB internal memory, rear and front cameras 13 megapixels and 8 megapixels respectively, and battery of 2350 mAh.

Although it contains quite a lot of changes, there are things that are unfortunate because all three still adhere to the Android operating system last year, namely Android Marshmallow 6.0.1. Regarding the price of each mobile phone will be valued at 329 euros for Galaxy A3 (2017) and 429 euros for Galaxy A5 (2017), while for A7 (2017) is not yet known. The true Samsung Galaxy A 2017 will begin to be bought and sold in several countries in the Asian region from the end of January, although it does not specifically say which countries will taste this series of phones, including Indonesia.

IObit Screen Recorder- The Tool To Record On PCs