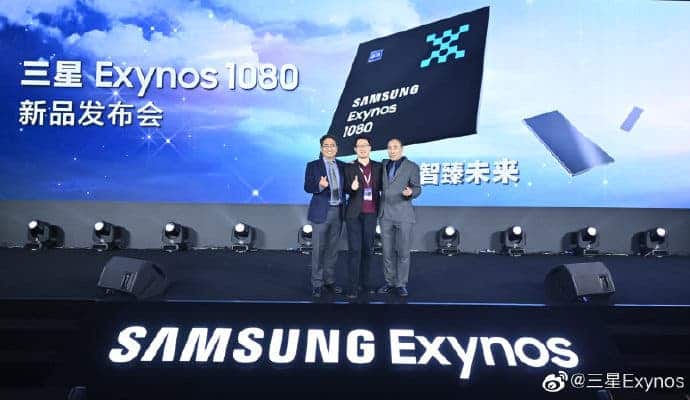 Last month there was news that Samsung is launching its new chipset Samsung Exynos 1080 on 12th November. Well, the news was correct as Samsung announced the chipset at an event in China.

The most highlighted feature of this silicon is that it is the company’s first chipset based on 5nm architecture. And most importantly it is the first mid-range chipset to be built on 5nm fabrication.

This newly announced chipset comes with all the latest features and technology including 5G. It will initially debut on a VIVO smartphone later this year or in 2021. We will also see this chipset in many smartphones in 2021 due to the Samsung partnership with Chinese brands.

For graphics, the chipset comes with the Mali-G78 MP10 GPU. Due to the presence of Mali-G78 GPU, the graphics performance is similar to Exynos 990. Exynos 990 chipset is the Samsung flagship SoC and is used in Samsung Galaxy Note 20 series.

On the camera side, the chipset is compatible with 200MP cameras or 32MO+32MP cameras at the same time. On the video front, it supports 4K videos at 60fps and video recording of HDR10+.

The Neural Processor Unit (NPU) in the Samsung Exynos 1080 SoC is capable of reaching 5.7 TOPS performance. Another notable feature is the support for the 3.1 UFS storage and LPDDR5 RAM. It is a 5G chipset and supports the mmWave 5G and sub-6GHz 5G.