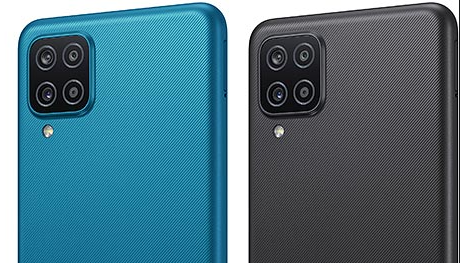 Just a day after being listed on the FCC website, Samsung has officially unveiled the Galaxy A12 handset today. Alongside, the Galaxy A02 was made official too. Both these handsets share a few similarities in terms of battery and display. These are placed in the mid-range segment and will be available in Europe initially.

The all-new Galaxy A12 sports a 6.5″ HD+ TFT display with 720p resolution. With a dewdrop notch, it runs on Android 10 and probably has MediaTek’s Helio P35 SoC. It comes in three storage variants like 3GB, 4GB, and 6GB of RAM and upto 128GB of ROM.

It packs a quad-rear camera setup with 48MP (f/2.0) as the primary sensor, followed by a 5MP (f/2.2) ultra-wide lens with 115° of coverage and a pair of 2MP (f/2.4) lens as macro and depth sensors. Upfront, there’s an 8MP (f/2.2) lens. Having all the required connectivities inclusion a side-mounted fingerprint sensor, it has a 5000mAh battery with 15W fast charging.

On the other hand, the budget Galaxy A02s has the same display and battery, and come with a triple rear camera setup. This is led by a 13MP lens as the primary sensor followed by the same dual 2MP lens as depth and macro lens. Upfront, there’s a 5MP (f/2.2) lens for selfies.

Having the same connectivities, it’s powered by a Snapdragon 450 SoC, that has Adreno 506 GPU, all running on Android 10. It has 3GB of RAM and 32GB of ROM.

Coming to the pricing, the Galaxy A02s is priced at €150 for the sole 3GB/32GB variant and comes in Black and White colors. And the Galaxy A12 comes in Black, White, Blue, and Red variants, and priced at €179 for 3GB/32GB and €199 for 6GB/128GB. These are available in European markets initially, with global availability yet to be announced.