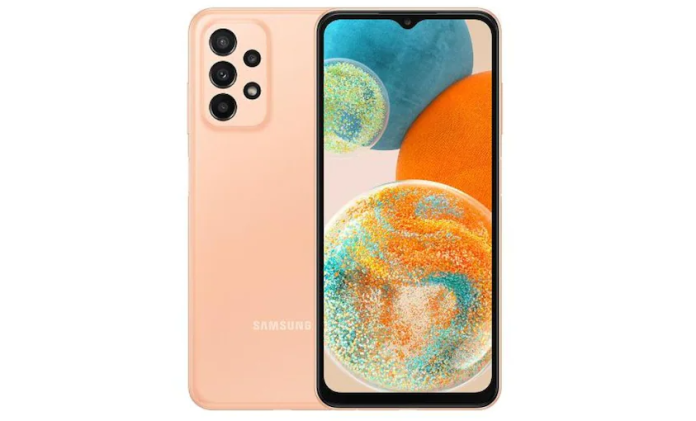 The device follows the same design language as previously launched Galaxy S series devices. There is a Quad camera setup on the back along with an LED flashlight. The camera module is separate from the main frame of the device and has three cameras in a vertical array along with a fourth sensor and flashlight next to it.

On the front is a 6.6-inch Full HD+ infinity v display. The display has a V-shaped notch at the top center for the selfie camera and it is a standard 60 Hz display. Samsung did not reveal the specification and name of the chipset used for this device. However, there is an octa-core 5G chipset used in this device, as per Samsung. For the storage option, there is either 4GB, 6GB, or 8GB of RAM along with 64GB or 128GB of internal storage. Users can expand the internal storage by up to 1TB through a memory card.

On the rear side as mentioned before there is a quad-camera setup. The camera setup includes a 50MP main sensor with optical image stabilization along with a 5MP ultra-wide lens, 2MP macro lens, and a 2MP depth sensor. There is an 8MP front camera with an f/2.2 aperture for selfies and video calls.

Samsung Galaxy A23 5G is equipped with a huge 5000 mAh battery cell with the standard charging technology. There is no fast charging technology available with this device. The device runs on OneUI 4.0 on top of Android 12 out of the box which is a good sign.

Other specification includes dual-band Wi-Fi, Bluetooth v5.1, a side-mounted fingerprint sensor for security, an accelerometer, gyroscope, geomagnetic sensor, virtual proximity sensor, and a virtual lightning sensor. It is available in White, Pink, Blue, and black color option and Samsung has yet to disclose the price of this device.