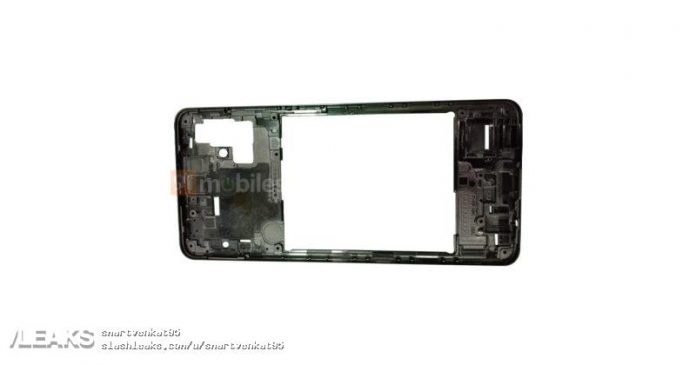 It is very much possible that the Samsung Galaxy A51 may arrive with a quad rear camera design, according to a leak that appears to depict the inside of the smartphone. Published by \LEAKS, one of the images depicts an L-shaped cutout in the top left corner of the device, and we here at GetTechMedia believes that this cutout will hold four camera sensors. If it turns out to be so, the Samsung Galaxy A51 would be the first Galaxy smartphone with its camera sensors placed in such a design and the second one of their products to have four rear-facing cameras. The first was the Samsung Galaxy A9 that was released in 2018.

And so far it seems like the L-shaped cutout could be entirely for the smartphone’s camera, as there’s a separate hole for the LED flash next to the cutout. A specific dubious leak many months ago had claimed that the Samsumg Galaxy A51 and A61 would have four rear cameras, and the leaked images suggest that may actually be the case. The same leak had also said the Samsung Galaxy A51 would come packed with a 32MP primary camera, a 12MP ultra-wide camera, a 12MP telephoto camera for 2x optical zoom, and a 5MP depth-sensing camera. However, whether those megapixel counts are accurate it is still unclear at this point in time so please remember to stay tuned.

Regardless of what the camera resolutions may be, a quad camera setup would get the Samsung Galaxy A51 a lot of attention. The Samsung Galaxy A50 is arguably Samsung’s most popular mid-range smartphone this year and an extra rear camera could be a good way to make the Samsung Galaxy A51 stand out, especially since it’s expected to carry specs similar to the Samsung A50/A50s in quite a few areas, such as the underlying chipset, the RAM and the storage configurations. Android 10 out of the box would be another great feature, although that is likely to be common to all the A series variants that Samsung will launch in 2020.