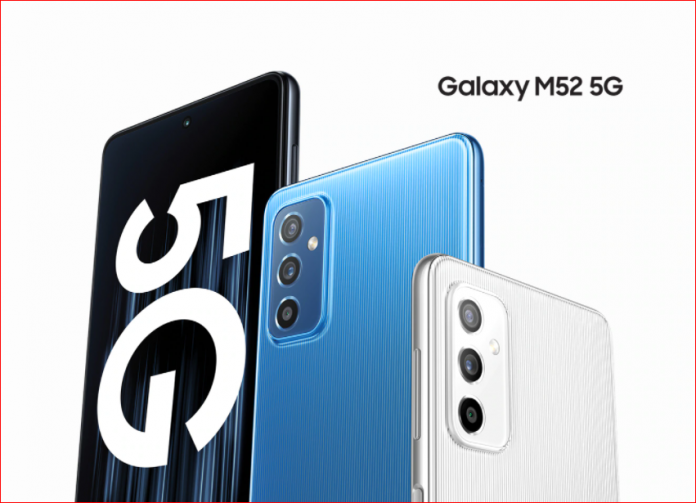 Samsung Galaxy M52 5G debuts in Poland quietly as the smartphone is also tipped to get launched in India soon. The device appeared on Samsung’s official website. The website list the complete specification of Samsung Galaxy M52 5G. The main highlighting feature of the device is the 120 Hz higher refresh rate, 5G, triple rear cameras, and 25W fast charging.

Samsung’s Polish site list the complete specification of this device. The device boasts a 6.7-inch full HD+ super AMOLED display. It has a pixel resolution of 1080*2400 pixels and a 20:9 aspect ratio along with a 120 Hz higher refresh rate. This display is a flat display and has a center punch hole cut out for the selfie camera.

Samsung Galaxy M52 5G is powered by an octa-core chipset which is coupled with the 6G of RAM and 128GB internal storage that can be expanded via micro SD. The official site doesn’t disclose the exact detail of the chipset but it is expected to be Qualcomm Snapdragon 778G. The device’s Amazon India listing clearly mentioned that this device will be powered by a 6nm Qualcomm Snapdragon 778G chipset.

On the backside, it has a triple rear camera setup arranged in a vertical camera module. It has a 64-MP main camera sensor along with f/1.8 aperture, a 12-MP ultra-wide lens with f/2.2 aperture, and a 5-MP macro lens.

The center punch hole cut out on the display houses the 32-MP shooter with an f/2.2 aperture for capturing selfies and making video calls.

On the software front, it comes with One UI 3.1 based on Android 11 out of the box. It has support for 5G connectivity as well as 4G LTE, Wi-Fi 6, Bluetooth 5, and NFC.

The device has a huge 5000 mAh battery with the support of 25W fast charging. Last but not least it comes with all the main sensors like an accelerometer, magnetometer, gyroscope, and proximity sensor.