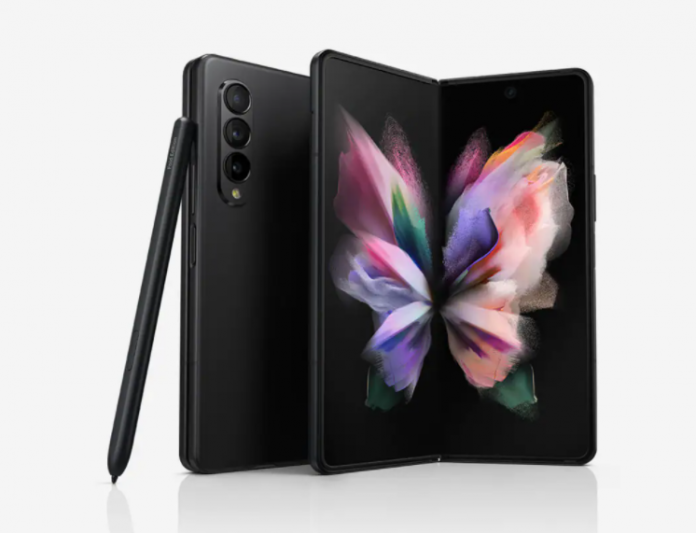 At an unpacked event held today, Samsung launched a plethora of its next generation of devices. Instead of it’s popular Note series, today Samsung announced its foldable devices which the company was teasing for many days.

Among these devices is the much-anticipated Samsung Galaxy Z Fold 3. The third generation of the foldable device comes with many improvements and updates that the users were anticipating. The most notable improvement was the IPX8 water-resistant rating, S-Pen support, and the under-display selfie cameras. Today for the first time Samsung announced a device that has a selfie camera under the display. The South Korean company also became the third OEM to announce a commercial device with this new technology.

The newly announced device comes with the flagship level specification as it needs to fill the void created by the Galaxy support with its next generation of the flagship.

The display is the most highlighted and talked about feature of the Samsung Galaxy Z Fold 3. The device comes with a folding inner display and the secondary outer display. When unfolded, the display becomes a 7.6-inch diagonal screen. It is an AMOLED display and comes with a higher refresh rate of 120 Hz as most flagship phones come with a higher refresh rate these days.

Let’s talk more about the durability of the display as it is the key element of the device. In this device the company claim that the UTG display is 80% more durable than the previous one and has 29% more brightness than last year’s model.

Just like the S-series, Samsung brings Z fold 3 with the flagship Snapdragon 888 chipset. Remember that it is the regular Snapdragon 888 SoC and not the 888+ which debut with the Mi Mix 4 yesterday.

But this chipset is still one of the best in the market as it was used in many flagship devices launched in the first half of this year. Qualcomm Snapdragon 888 SoC is coupled with up to 12 GB of RAM and 512 GB of UFS 3.1 internal storage. 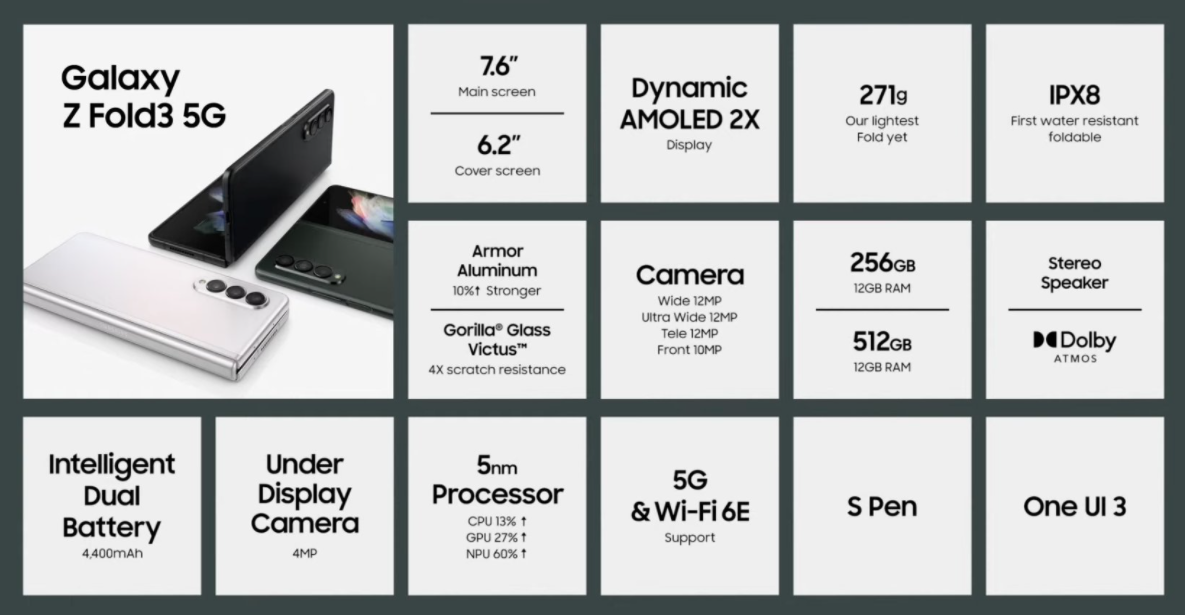 On the inner display is the under-display selfie camera which Samsung brings for the first time in its device. The selfie camera is a single 4MP shooter with f/1.8 aperture and 2.0µm. There is a 10MP selfie camera on the secondary display which intends for selfies. The inner camera is mostly for video calls and online meetings.

The triple rear camera on the rear side carries the same setup as the last year’s model. Strangely, Samsung didn’t try to bring the improvements in its next-generation foldable’s rear cameras. The device comes with a 12 MP main camera lens which has an f/1.8 aperture. There is also a 12 MP f/2.2 aperture ultrawide lens and a 12 MP f/2.4 aperture telephoto lens. The telephoto lens also offers 2x optical zoom to capture distant shots.

Samsung has made the tips of its styluses in such a manner that makes sure the inner display of the device will not be damaged.

The device comes with the One UI 3.0 based on the Android 11 out-of-the-box. There is a 4400 mAh battery on the battery side in the device that supports 25W fast wired charging and 10W wireless charging. Some other specs include 5G support, Bluetooth 5.2, Wi-Fi 6, USB Type-C.