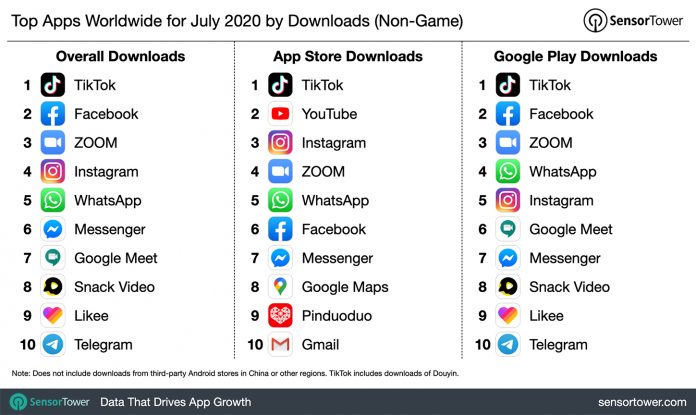 Byte dance owned social networking app has been downloaded more than 65.2 million times. The year on year increase on app download is 21.4%.

App spending also increases as users spend $102.5 million on TikTok in July, 89% of which comes from the home country China and 6% comes from the United States.

Among the total downloads of TikTok 9.7% comes from the United States and 8.5% comes from Indonesia. Social networking giant Facebook comes second in the list of the most downloaded app in July 2020.

Facebook has been downloaded more than 53.6 million times with India being the largest contributor. India contributes 23.1% of the total Facebook downloads while 9.1% comes from Indonesia.

Apart from these two, zoom, Instagram, WhatsApp, Messenger, Google Meet, Snack video, like, and telegram are among the top 10 most downloaded apps in the month of July 2020.

If we look at the list of the top-grossing non-gaming application globally in the month of July this year. TikTok remains at the top of the list while YouTube took the second spot on the list.

YouTube generated more than $76.8 million in gross revenue which is 43.8% more than the July of the previous year. Most of the YouTube revenue generated in the United States. The US contributes 54% of the total revenue while 12% of revenue comes from Japan.

The other apps in the list of top-grossing non- gaming applications are Tinder, Tencent Video, iQIYI, Disney+, Bigo Live, Netflix, Piccoma, and Line.

Due to the ban on TikTok by India in late June from both the iOS and Android app stores, snack videos get benefits from this. Snack video appears in the list of most downloaded non-gaming applications for the first. It comes at number eight in the list which is followed By Likee, an app similar to TikTok.

The interesting thing is that since its ban in India many Government officials urge users to not use TikTok. The app is gone through immense inspection by many Governments including the United States and Australia.

Still, it tops the list of most downloaded non-gaming and the top-grossing non-gaming app list. TikTok is owned by a Chinese company ByteDance and many governments think that the Chinese government could get access to the user’s data which is stored in TikTok servers.

President Trump also signed the executive order to ban TikTok from the United States within 45 days many media outlets reported. Microsoft is also in talks to buy complete TikTok global operations from the ByteDance.