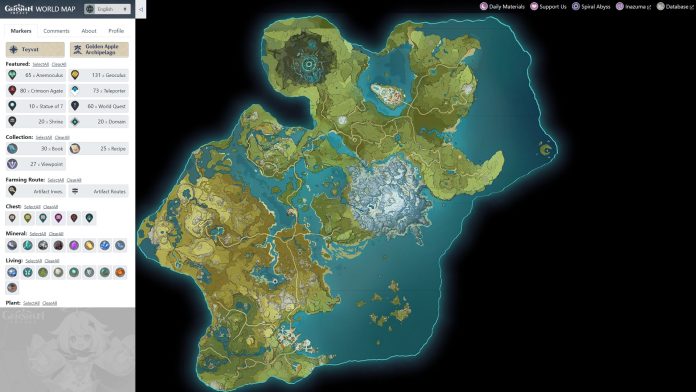 Genshin Impact has recently launched a new interactive map that will help players playing the game to locate resources and do many other things across Teyvat. Here we have discussed all the basic information about this new Genshin Impact map that you need to know. Before starting with the map, here are a few words about the game.

A few words about Genshin Impact

Genshin Impact is a famous free-to-play game developed by a Chinese developer named mHoYo. Released in 2020, the game gained amazing popularity within two years because of it’s interesting storyline and gaming experience. In the story, a traveler travels to search for their lost sibling along with their companion Paimon. During the search, the main character becomes involved in different affairs of the Teyvat nation. Players can play this game on PC, PS4, PS5, and iOS devices and there is no news about the Xbox or Nintendo Switch release at this moment.

Visions, Weapons, and Artifacts of the game

Here are the main visions, artifacts, and weapons of the game. The game comes with an elemental-style gameplay system where the playable characters have their own elemental power, known as vision. There are different types of visions available in the game, such as

Moreover, each character comes with their own weapon. The list of weapons includes:-

In the gameplay, you will be addressing the items as Artifacts. These items are used to raise a character’s status and make them stronger in ATK, DEF, CRIT, Max HP, Elemental output, etc. When you play the game, you must equip and switch out Artifacts to your characters according to the level.

How to use the new official interactive Genshin Impact map to locate resources?

A map is extremely important in almost every gameplay. A map not only helps players to navigate for all the resources but also can help players to create strategies as well. Recently, Genshin impact has launched a new interactive map that can be very useful for players playing the game. However, since the map has been released, some players have been quite confused about how to use this map. You can go through the complete article if you are one of those players.

The map is not very complex to use, as miHo Yo has kept it simple and straightforward. On the map, players can get the entire list of all resources across the area. Not only that, but this map will also provide the players with personalized map reports which depend on which resources the players have not collected yet. It also depends on which temple they have not attuned to the moment.

There are amazing advantages that players can get from this map, and here we have mentioned how to use the map properly. The task is quite simple, and players can easily use this map to increase their efficiency in the game. However, here is the step-by-step process you can go through if you are having trouble understanding the same.

If you get this interactive map, the gameplay will become much easier for you, and your gaming experience will also increase. This map was a need for players who love playing this game, and now it is out for your convenience. Hope this article was helpful and you have successfully understood how to use the new interactive map of Genshin impact.