Whether for personal use or for business, you might need to snap a screenshot. Regardless of the purpose, screenshots can be used for a variety of reasons. A screenshot comes in handy when you want to share what you are seeing without describing it. But, How to Screenshot One screen? Well, there are several ways to screenshot one screen.

If you are looking forward to screenshotting your PC’s screen but don’t know how to do it, stay tuned to find out the ways and different methods to get through it. Some of them will be as simple as clicking a button on the keyboard and some might involve downloading software.

If you don’t know How to Screenshot One screen, the good news is that the process is easy and we will guide you with a detailed look at every method.

How to Screenshot One screen

The below-mentioned methods will help you to take a screenshot of your PC screen. Some of them are the most common ways to take a Windows screenshot.

This is one of the most common ways to screenshot windows. The print screen button enables you to snap the entire window. You simply need to press the button labeled as “PrtSc” on your keyboard. This function will automatically copy the entire image to the clipboard.

However, no notification will be sent. If you want to insert the clip into a document, you can simply paste it over there.

You can definitely use different commands given using your Computer’s keyboard. If you are looking forward to capturing just a portion of your windows, then we have a command for you.

You can press and hold down the Windows, Shift and S key to enable capturing a portion of your Windows. Once you put in this command, the screen will dim and a cursor will appear. 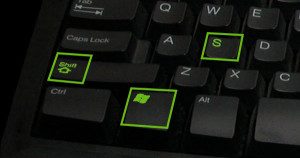 To take a snap, you will have to click and drag the cursor over the area you want to capture. Once the area to be captured is chosen, release the cursor.

Once the mouse is released, the Screen will come back to its normal state. However, you won’t be notified about the screenshot. The snap you captured is automatically copied to the clipboard. All you have to do is paste to the document.

You can either paste it in a word doc, email, google docs, or even in Paint.

Save the image in the gallery

If you don’t want the hassle of pasting the captured image, then you can always go with this trick. Using the command Windows and the Print screen will do the deed.

The command will automatically save the screenshot to your PC’s gallery. Just press and hold the Windows key and print screen button. However, just like the above command lines, you will not be notified confirming the screenshot. 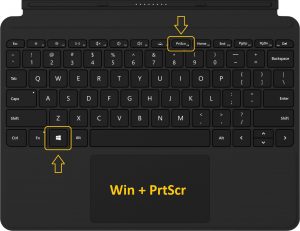 To find the snapshot, go to the Pictures folder. There you can locate and find a folder named “Screenshots”. All the snapshots captured using this command line are automatically saved in this folder.

Now, it might happen that using the above command lines will result in unwanted space being captured. The command line that I’m going to tell you will capture the active window.

Many of you might be thinking that we can always go with the Windows, Shift and S key command but it is still a hassle to get the perfect snippet. Instead, use Alt and print screen command line to get the snap of the active window.

However, unlike the above-mentioned command line, it does not automatically save the snapshot. So, you would have to paste the snapshot in a document.

MS Paint can be used to save the screenshots you took. Why use MS Paint for storing the screenshots? It might be that you are not exactly taking a screenshot for inserting it in any document or email.

Instead, you are taking the screenshot for future references or use. This is where MS Paint comes into view. You can paste the screenshot in MS Paint and save it. The screenshot can then be viewed using the photos app pre-installed in the PC.

Everyone has heard the name before. The snipping tool is one of the best and most recommended tools when it comes to taking a screenshot on PC. Not only it is convenient but it is also versatile and robust when it comes to saving the screenshot captured.

It is the best alternative to the Snipping Tool. The Snip & Sketch utility is owned by Microsoft and is pre-installed in any newer versions of Windows. To use it, simply press and hold Windows, Shift and S key.

Once you press and hold the keys, the screen dims ad renders a 5 button toolbar along the top of your screen. However, it does not save the screenshots in a file. It just copies the screenshot to the clipboard which you need to paste it to any document to store it.

You can always give a try to this software. If you are looking forward to working more professionally, then this software can help you. The software enables you to edit the screenshot you took.

You can either use the command lines or the software applications mentioned above to take a screenshot. With the above guide, for you, there is no need to figure out how to screenshot on one screen.