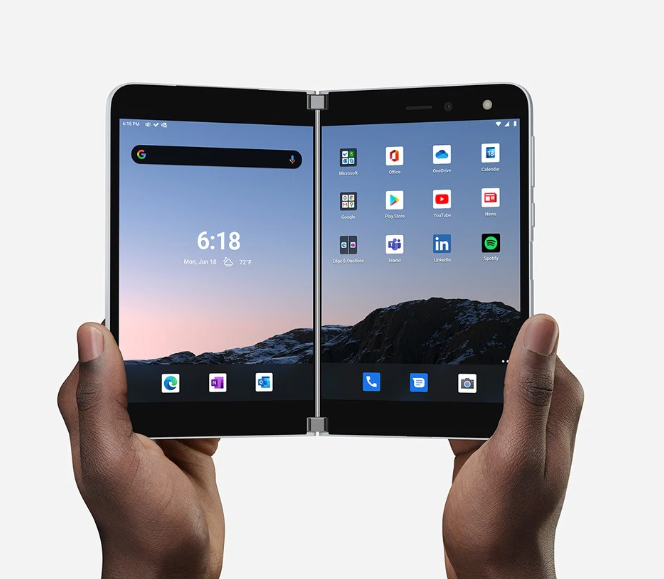 Microsoft Surface Duo is Microsoft’s answer to the foldable devices. Last year at an event Microsoft, gave a sneak peek into its foldable device, but at that time, the phone is the developing stage.

Now, Microsoft announces that its foldable device is up for preorder starting today while the phone arrives on September 10. The device will cost a staggering $1400, which will compete with the likes of Galaxy Z fold 2, Galaxy Z flip, and Moto Razr. As the preorders start today, Microsoft revealed some key specs which we will be discussing in this article.

The Microsoft Surface Duo is an Android Phablet, using a different and more customized version of Android. The design of Microsoft Surface Duo is unique of its kind, taking foldable devices to the next level. Instead of Using a single plastic display, Microsoft uses a two 5.6-inch display separated by a novel hinge. Samsung, Motorola, and Huawei all use a single plastic screen in their foldable device, which folds from the center. 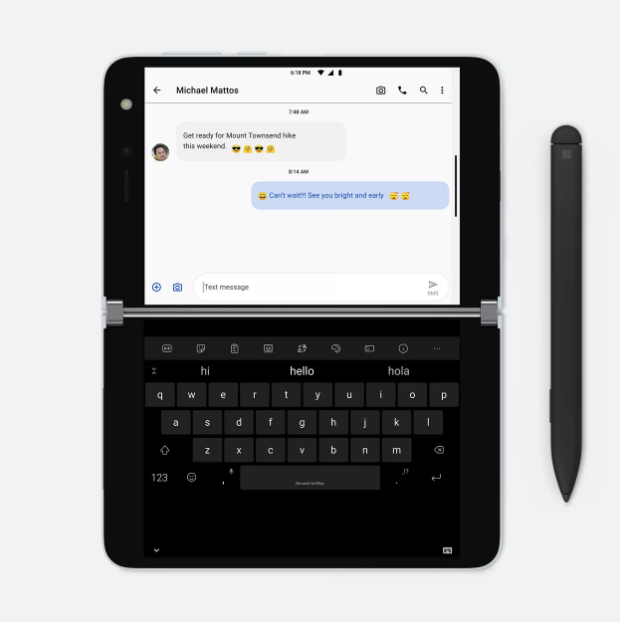 Microsoft spent five years working on the design of its foldable device, especially the hinge. The hinge that uses in Surface Duo will open easily, and it is difficult to close it accidentally. It will help both the screen rotate at a 360-degree angle. Microsoft urges users not to call it a phone, but it is a different product.

“When we designed it, the intent was, ‘How do you make something so thin, beautiful, light and super elegant that when people pick it up, they can feel that emotion in the product,” Panos Panay, Microsoft’s chief product officer and head of Surface devices, said in an exclusive interview.

The device has changed many things about foldable devices. Microsoft itself wrote the software for this device in collaboration with Google. The software is designed for both the screens to interact. It works so fluently and accurately that you can drop a picture from one screen to the other by just dragging it. Some sensors track the movement and the positions of the display.

The device looks good from the first impressions and early hands from the reviewer. But the question is, Charging $1400 for a foldable device that too when the world economies gone into recession.

Here are the Key Specs of the Microsoft Surface Duo:

There are two 5.6 inch OLED displays put together with a hinge between them. The display comes with a resolution of 1800*1350 and 4:3 screen aspect ration. When combined, the total usable screen becomes 8.1 inches with the display resolution of 2700*1800. The displays are protected by the corning gorilla glass and are designed in such a way like dual-screen PCs worked.

On the inner side, there is a powerful flagship Qualcomm snapdragon 855. The chipset is coupled with 6 GB of RAM and 256 GB of internal storage. The phone doesn’t have 5G compatibility and comes with a protective case included in a box.

There are two batteries split under the two displays with a combined capacity of 3577 mAh. When compared to others, then the battery is on a lower side as there is 4500 mAh on the newly launched Note 20 Pro. Even there is a battery of 4380 mAh on the Galaxy Fold launched last year.

Microsoft claims that the battery will go through all-day with around 27 hours of talk time. The battery stand by time will be near to 10 days. The exact battery timing will be known when the reviewers and users will test the device.

There is only one camera that will be used for both selfies and as a rear camera. There is an 11 megapixel f/2.0 lens that has all the modes like auto low light, HDR recording, and superzoom, which is up to 7x. The camera can record both the 4k and 1080p videos at 30 fps and 60 fps.

The software of Microsoft Surface Duo:

The device comes with an Android 10 out of the box, so all the android apps will smoothly run on it. App developers also have the option to customize their apps for the dual-screen. Microsoft also worked on its android apps (Office suits and One Drive) so, they will be easily usable on dual display. Users can also use different apps on both screens at the same time.

The E-Commerce giant Amazon also made changes in its kindle app for the surface Duo. Now using kindle on the foldable looks like reading a book when pages are snap across the displays.

These are some of the key specs of the upcoming foldable Microsoft Surface Duo. We will let you know about the surface duo once more information is being revealed.

How to Send Long Videos on WhatsApp for Android/iPhone