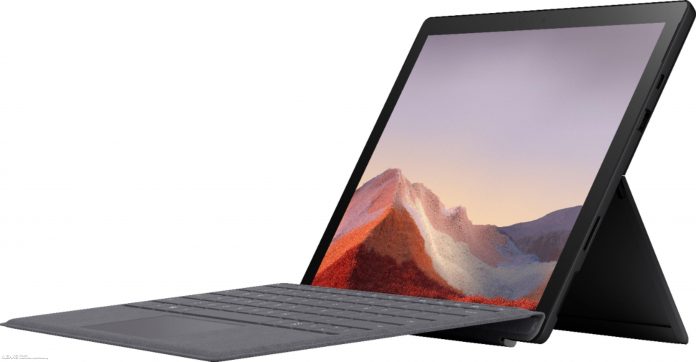 So recently there was a leak spotted on Slashleaks that there is an alleged render of The Microsoft Surface Pro 7 as you can see above. But as we do always suggest here on GetTechMedia to take these rumours and alleged renders with a pinch of salt.

For those of you who might be wondering what the Surface Pro 7 is, in summary it is:

Surface Pro 7 is a 2-in-1 detachable tablet computer developed by Microsoft. It is the seventh generation of Surface Pro and was announced alongside the Surface Laptop 3 on October 2, 2019. The 12.3″ touchscreen 2-in-1 laptop that’s ultra-light and versatile — Surface Pro 7 is your endlessly adaptable partner now with faster processing and more connections.

Microsoft has kept things frustratingly vague on the specs front, but it has at least confirmed that the Surface Pro 7 is powered by Intel’s latest 10th Generation processors, with dual-core i3-1005G1, quad-core i5-1035G4 and quad-core i7-1065G7 models available.

Microsoft is claiming up to 10.5 hours of battery life from a full charge, and says you’ll be able to charge it from flat to 80% in “just over an hour”, thanks to the addition of fast charging technology.