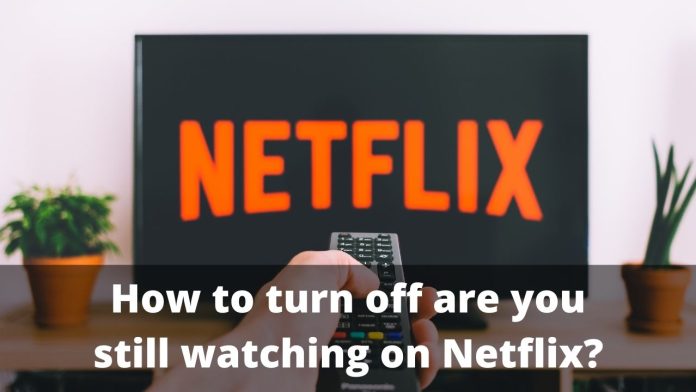 Like other streaming apps, Netflix appears to be created for binge-watching. The majority of the titles on the platform offer instant access to every episode of every season. As soon as the current episode of a show ends, Netflix starts playing the following one. Users can also choose to skip each show’s opening credits scene to get to the content faster.

One aspect of the service, though, appears to prevent bingeing. Once you have watched a few episodes of a show, the video will occasionally pause abruptly during the first few minutes of an episode. The question “Are you still watching?” will then be asked to you. You must choose “Continue Watching” in order to continue the episode. If not, Netflix will end your current viewing session.

After watching two episodes in a row without using the controls, this popup will appear. However, if you have engaged with the video in any way, such as pausing, skipping, or hovering over the window, this prompt won’t show up. In this guide, we will discuss how to turn off “Are you still watching?” on Netflix along with all the necessary details you need to know about this popup.

Why Does Netflix Ask, “Are you still watching?”

The Netflix app reportedly asks this question to stop users from wasting bandwidth by keeping a show playing that they aren’t watching. This is true if you use mobile data to watch Netflix on your phone. Given that network providers set strict data caps and may impose astronomical fees for data used over your phone plan, every megabyte is important.

Of course, this saves Netflix bandwidth as well—if you doze off or simply leave the room while watching Netflix, it will stop playing immediately rather than streaming until you stop it.

Additionally, according to Netflix, this ensures that when you resume watching a series, you won’t lose your place in it. If you stop watching in the middle of a binge, you might wake up to find several hours have passed since you stopped. You won’t be able to recall where you left off.

However, for some Netflix subscribers, this feature is more annoying than helpful. It’s much less likely that you will be interrupted during your binge-watching session if you watch television mostly during the day. It’s not surprising that many people are trying to find a way to disable it.

In this article, we will discuss a few steps for turning off Netflix’s infamous auto-play feature on various platforms.

How To turn off “Are You Still Watching?” on Netflix On A PC

Netflix does not directly allow you to disable the “Are you still watching” prompt if you prefer to watch the service on your computer. The good news is that there are several ways to stop it from appearing, including the use of a few clever Chrome Extensions to completely remove it.

The first option is to turn off auto-play, which will turn off the “Are you still watching” prompt but will force you to manually play each episode.

But if you are far from your computer, it’s unlikely that you’ll want to move to use arbitrary controls or play each episode manually. Fortunately, a fix is available. Several browser add-ons offer uninterrupted Netflix streaming and other helpful features. The extensions “Never Ending Netflix” and “Netflix Pause Removal” can be added if you are using Google Chrome or other browsers that support Chrome extensions.

With “Netflix Pause Removal,” you can binge-watch your preferred content without being interrupted by the “Are you still watching” prompt.

How To turn off “Are You Still Watching?” on Netflix On A Mobile Device

Sadly, there isn’t a secret switch to turn it off. After 90 minutes of streaming or three consecutive episodes without interruption, the prompt will show up. Utilizing some of the controls is the simplest way to stop this. Since your phone is always with you, doing this is simple while streaming. To let Netflix know you’re there, simply tap a few of the controls.

Disabling auto-play is another option you have. There won’t be any inconvenient prompts if you manually play each episode after turning off auto-display. If you’re determined to watch just one episode tonight, you should consider using this option.

Only through a browser can auto-play be turned off. You can change the settings on your phone or computer since they affect all of your devices. To do so, follow the below steps:

Netflix claims that despite how annoying the prompt is, they are saving an average of 2 billion GB of data worldwide every week in order to protect their users’ data.