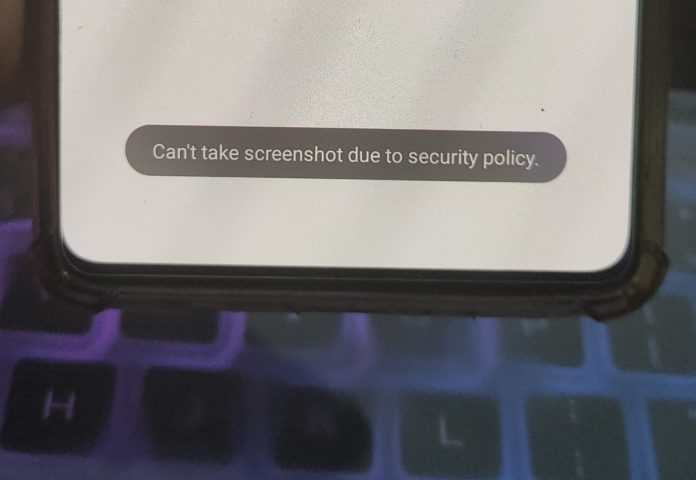 Whenever we find something meaningful, be it some notes, passwords, or other data, one way to keep it safe is by getting a pen and a piece of paper to note it down. But modern smartphones have made this work extremely easy by providing a means to take screenshots. You need to just press some buttons, and get a screenshot of the data you want to store in the form of an image. Unfortunately, sometimes you will be greeted by your smartphone with a “Can’t take screenshot due to security policy” message. This is really frustrating when you want to take a screenshot of some information to send it to someone or to keep it safe in your gallery.

Why do you get this message?

Well, you might have already guessed the very obvious reason that is also mentioned in the message. It’s because of the security concerns. You might have known that Android OS developers also play their role in giving you this message. They do this to restrict applications on your smartphones from taking screenshots of valuable private data.

Screenshots can be leaked and may get into the wrong hands, and it’s no surprise as we continuously observe sensitive data of celebrities and political people being leaked. Screenshot abuse is getting common day after day. To prevent this, Android OS developers and application developers take necessary measures.

Suppose for some reason, you want to take a screenshot, and knowing that screenshots do not always have to be some sensitive data, there are some workarounds that you can use to get a screenshot. A list of popular workarounds is provided in the next section.

Is there any workaround for the “Can’t take screenshot due to security policy” message?

If you are going to take a screenshot from a financial app, your phone will not allow you to do so. Your financial data is important, and if it allows screenshots, it would be easy for any random person to ask for your phones, sneak into your sensitive apps, take screenshots and send them to their numbers.

Before installing any third-party app, make sure it’s verified and also read the reviews and ratings given to that app.

2.   Shift from app to web browser

Banking apps mostly try to stop you from taking screenshots, which is 100% understandable as they do so for the safety of your sensitive data. But if you want to take a screenshot, you can try to open that data in a web browser instead of the app.

For example, the social media apps do not allow you to take screenshots of locked profiles. But if you want to, open your browser and get to that locked profile. Once you are at the locked profile, simply take a screenshot from there.

If the phone you are trying to take screenshots on is issued to you by your company, it’s possible that they might have disabled the screenshot functionality. This generally does not happen but is possible if their data is sensitive and there is no room for data leakage.

The official way is to contact your IT department to ask if they can allow you to have this no-screenshot feature disabled. The other way, which is not the recommended method for ethical reasons, is to remove the app or account restricting you from taking screenshots.

Most modern age phones have virtual assistant software. What they do is they perform tasks on your behalf. You simply command them using your voice, and they execute those commands.

Siri and Google assistant are the most well-known and famous virtual assistant software, whereas Siri is purely for iOS devices. If you are on an android phone and google assistant is enabled, just say “Ok google” or “Hey google“.

If you are using incognito mode, then most probably, you would not be allowed to take a screenshot. This is because incognito is used when you do not want history to be saved or when you search for something sensitive. This usually happens on android phones with google chrome and Mozilla web browsers.

Well, if you got “can’t take screenshot due to security policy,” and taking a screenshot is very important to you, then there is one way that will work for you. You are going to need an extra mobile phone for this method. All you need to do is download apps like team viewer on your phone and another phone.

You can access your phone’s screen on another device with team viewer. Open the app that is restricting you from taking screenshots and take a screenshot from the other mobile phone.

This may sound very odd, but it is one of the reasons. Besides any security reason, the “can’t take screenshot due to security policy” message could pop up because you have not enabled the media storage permission. This stops screenshots from being stored in your gallery.

This mostly happens with those smartphones that use an SD card for storage. To allow media storage permissions, you need to find the media storage settings in your phone and enable this feature from there.

Another possible yet not so obvious reason for not being able to take a screenshot is that your smartphone might not have the space to store the image. Obviously, you would need to have some storage space to keep any sort of data. If this is the case, try making some room by deleting unwanted data.

It’s possible that you have recently installed an app, and it’s causing bugs. Apps causing bugs are not a new thing. People have noticed that when their Instagram app runs in the background, they cannot take screenshots on Facebook.

After closing the Instagram app, they can perfectly take screenshots. While the exact reason is unknown, some apps do cause trouble. If you are getting “can’t take screenshot due to security policy”, first try to close all running apps. If this does not do any good, try removing apps you recently installed on your phone.

While these methods are not necessarily valid or reliable for all mobile phones, they have worked for many people and are listed here for that reason. They include:

Open Settings > Additional Settings > Buttons Shortcut to enable the screenshot feature. Find the “Take a screenshot” option and click on it. There you can define how you are going to take screenshots.

Screenshots are useful when you need to save valuable information as an image in your gallery. Maybe you want to share that information exactly as it is presented. It is unfortunate and good at the same time that sometimes you are restricted from taking screenshots. While this mostly happens for security concerns, there are workarounds that you can perform to bypass this security policy. Remember that this is not recommended for sensitive apps like banking apps.