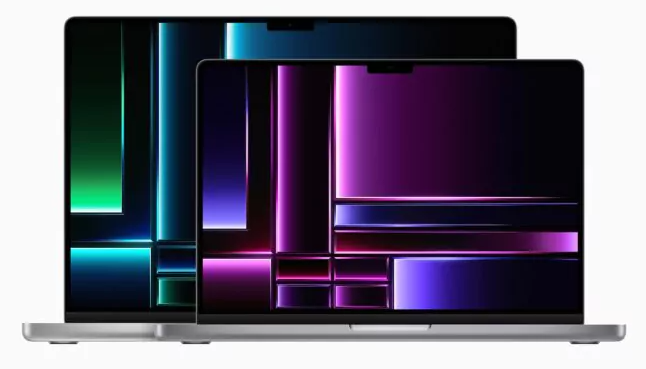 Apple today unveiled it’s next generation of MacBook Pro models with it’s in-house M2 chipset series. There are two screen sizes, a 14-inch MacBook Pro 2023 and a 16-inch MacBook Pro 2023. Both these devices look similar to it’s predecessor but Apple has made some incremental changes under the hood which make these laptops one of the fastest on the market. Apple recently launched it’s in-house M2 chipset series a few days ago which succeeds last year’s M1 series chipset.

The device comes in two different screen sizes: a 14-inch, and a 16-inch laptop. The display on both these devices remains the same and has the Pro Motion technology introduced last year in MacBook Pro with an M1 series chipset. The side rails of the device contain different ports such as HDMI, SD card reader, and MagSafe charging port for easy battery top-up. The SD card reader port makes the usage more efficient, especially for creators who have to transfer their files from SD to laptops for editing.

If we talk about under-the-hood changes, then these laptops are equipped with the most powerful internals. There is the latest ARM-based Apple’s in-house M2, and M2 Max chipset which succeeds last year’s M1, and M1 Max. The tech giant claims that these laptops are up to 6 times faster than the intel-based MacBook Pro devices. Also, users will get up to 22 hours of massive battery life on these devices.

The M2 Pro chipset comes with up to 10 cores or 12 cores of up to 8 high-performance cores and 4 high-efficiency cores. With these specifications, these laptops can deliver up to 20 percent better performance than the M1-powered MacBook Pros. There is the same 200GB of Bandwidth speed on these laptops as it’s predecessor. With M2 Pro there is support for up to 32GB of unified RAM as well.

The M2 Max chipset comes with an insane 38-core GPU and 12-core CPU. With these specifications, it can provide 30 percent faster GPU performance than the M1 Max-Powered MacBook Pro and supports up to 96GB of Unified RAM. The Memory Bandwidth speed is up to 400GB in the M2 Max-powered MacBook Pro.