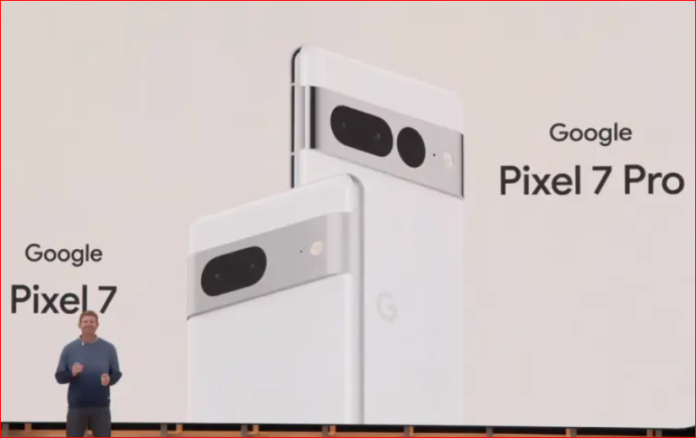 At it’s annual developer conference 2022, surprisingly Google shared the first glimpse of it’s upcoming flagship Pixel 7 series. Google made a couple of new announcements at it’s developer conference held on Wednesday which includes the launch of the budget-centric Google Pixel 6a and the Android 13 beta 2.

Google confirmed that the device will launch in the Fall of this year and comes with the stable version of Android 13. At the announcement, the company also showed the picture of both the Pixel 7 and the Pixel 7 Pro on the stage. Both the devices look exactly the same as it’s predecessor as there are no changes made in the design elements.

Both phones come with a redefined camera bar on the rear side as this time the company used recycled aluminum in the camera bar instead of the Glass used in it’s predecessor.

The camera bar and the rear frame of both devices are made up of a single piece of recycled aluminum instead of glass. There are cutouts on the camera frame that house the camera lenses. The standard Pixel 7 features a dual-camera system which is placed in a pill-shaped camera module.

The Pixel 7 Pro features a triple camera setup – a dual-camera setup in a pill-shaped camera module like the standard model and the third camera in a circular camera module. This is also the first time Google will bring a triple camera system to it’s pixel smartphone. At this stage, Google did not reveal the front side of the device so we have to wait for the actual launch or wait for some leaks and rumors.

And lots more too. We just can’t say yet. 🤫#GoogleIO pic.twitter.com/RfEfTGQ9p8

Apart from the looks, Google also revealed that both the Pixel 7 devices will be powered by the second generation of it’s in-house Google Tensor silicon, Titan M2 security chip, and will run on stable Android 13 out of the box.

Google also shared that the Pixel 7 will come in three color options that are Obsidian, Snow, and Lemongrass while the three colors for the Pro models are Hazel green, Obsidian, and Snow.

More details about the display, RAM, storage, and other bells and whistles are still under wrap and will be revealed later this year so we have to wait for that.

That’s it. This is an ongoing story and we will keep our readers updated about more details regarding the upcoming pixel flagship so stay tuned.