At Galaxy Unpacked event Samsung finally announced it’s much-hyped Samsung Galaxy Z Fold 4. It is the fourth generation of the foldable device from Samsung and is the successor of last year’s Galaxy Z Fold 3. Over the past few months, there have been many rumors and leaks regarding this device. We have heard almost every aspect of the device before the actual announcement.

It is the most powerful Samsung device to date and comes with the flagship specifications as one would expect from the device at this price point. Check the detailed specification of the device below.

The device looks exactly the same as it’s predecessor as there were only a few subtle changes on the outside. Most of the changes are on the inside as the device gets the latest internals which made this device the most powerful Android device to date. Samsung just made only a few refinements in the design rather than changing the design completely. 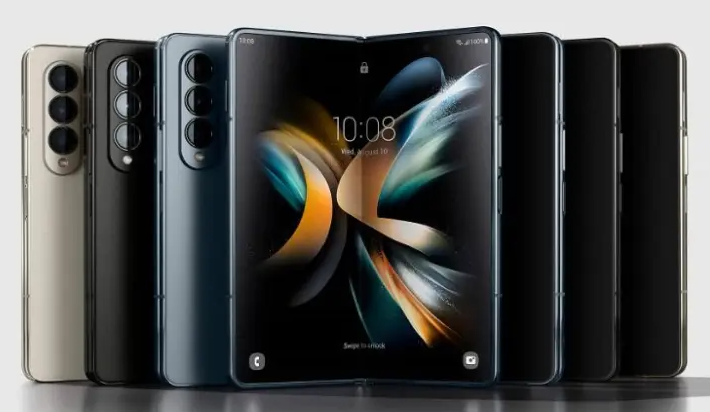 There is the same book-like design which has a cover display and an inward folding display that converts the device into a tablet when unfolds. The cover display has a center punch-hole for the selfie camera and the rear side of the display has a vertical camera module that carries a triple camera setup that looks exactly the same as it’s predecessor. This time the cover display is slightly slimmer than in the last generation and the hinge is also smaller. Samsung claims that the device is much more durable than the Z Fold 3.

The Samsung Galaxy Z Fold 4 has a 7.6-inch main display with a 21.6:18 aspect ratio and it supports an adaptive 120Hz fast refresh rate. This display is a dynamic AMOLED 2x display with 2176 * 1812 pixels resolution, HDR10+ support, and a density of 374 PPI. There is an under-display selfie camera at the top of the inner display. The inner display also supports S Pen but you have to buy it separately as no S Pen is included in the box.

The cover display is the same 6.2-inch AMOLED display as we see in Z Fold 3. It has an aspect ratio of 23.1:9 and 2316 x 904 pixels resolution. The cover display also comes with a 120Hz fast refresh rate but it’s not adaptive like the inner display.

It comes with the flagship specifications as it is powered by the latest and greatest Qualcomm Snapdragon 8 Plus Gen 1 Chipset paired with up to 12GB of LPDDR5 RAM and up to 512GB of UFS 3.1 internal storage. There is also a 1TB storage variant in some regions which costs more bucks. It runs on OneUI 4.1.1 based on Android 12 out of the box and this time Samsung made some changes in the overall UI as you get a taskbar at the bottom of the display when you use the device on tablet mode. You can set your desired apps on the taskbar just like you set apps on the home screen.

The device is equipped with the same 4400 mAh battery that supports 25W fast wired charging and 15W wireless charging. The battery capacity and charging remain the same as the previous generation but we can expect it can last long considering the efficiency of the snapdragon chip used in the device.

For optics, there is a triple rear camera setup that includes a 50MP main camera with optical image stabilization, f/1.8 aperture, and dual-pixel autofocus. The main camera is also paired with 12MP ultra-wide sensor with f/2.2 aperture and autofocus, and a 10MP telephoto lens with 3x optical zoom. The inner display has the same 4MP selfie camera with an f/1.8 aperture. Samsung said that they have made improvements in the quality of the front camera on the inner display.

It is not the cheapest device as it comes with a hefty price tag. The device comes in three variants and the base 12GB + 256GB storage variant is priced at $1799. The other two variants are 12GB + 512GB and 12GB + 1TB. It is available in Phantom Black, Greygreen, and Beige colors.