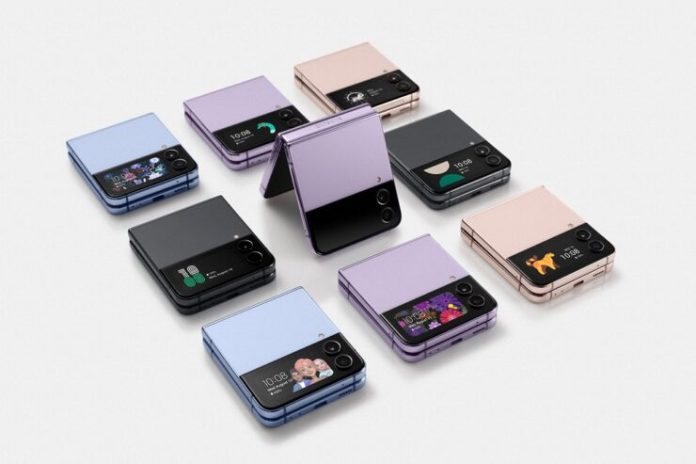 At it’s Galaxy Unpacked event, along with the Galaxy Z Fold 4 Samsung also announced the Galaxy Z Flip 4, it’s next generation of a clamshell foldable device. It is a successor to last year’s Z Flip 3 and comes with almost the same design as it’s predecessor. Check more details below.

The design remains the same with minor improvements being made to the hinge of the device. Samsung claims that the device is more durable than the last generation. There is a dual-camera setup on the rear side along with a cover display that now has more features and is more useful than the last generation. The cover display is a 1.9-inch Super AMOLED display with 512 * 260 pixels resolution.

When unfolds, it has a main diagonal 6.7-inches FHD+ AMOLED display with an adaptive 120Hz fast refresh rate. The display has a 2640 * 1080 pixels resolution and supports HDR10+. The display is also protected by the latest corning gorilla glass victus for better protection and the device is IP68 rated for water and dust resistance. There is a centered punch-hole cutout at the top of the display for the selfie camera.

Samsung Galaxy Z Flip 4 is powered by the latest Qualcomm Snapdragon 8 Plus Gen 1 chipset paired with 8GB of LPDDR5 RAM and 128GB of UFS 3.1 internal storage. The 512GB of internal storage variant will also be launched in near future. It runs on OneUI 4.1.1 based on Android 12 out of the box.

The device is equipped with a 3700 mAh battery that supports 25W fast charging. The battery setup is a significant upgrade over the last generation as the Z Flip 3 only has a 330 mAh battery pack. Samsung claims that a 25W charger can charge this device to 50 percent in half an hour. The device also supports wireless charging and wireless power sharing to charge other devices like earbuds wirelessly.

In the camera depart there is a dual rear camera setup that includes a 12MP with f/2.2  ultra-wide primary camera and a 12MP wide-angle camera with f/1.8 aperture with an 82-degree field of view and optical image stabilization. The device has a 10MP selfie camera with an f/2.4 aperture and an 80-degree field of view. On the connectivity front, there is 5G, 4G, and LTE support along with Bluetooth v5.2, Wi-Fi 6, and NFC.

The device starts at $999 for the 8GB and 128GB storage options as there is currently one storage variant announced. It is available in multiple colors that include Graphite, Blue, Pink Gold, and Bora Purple.