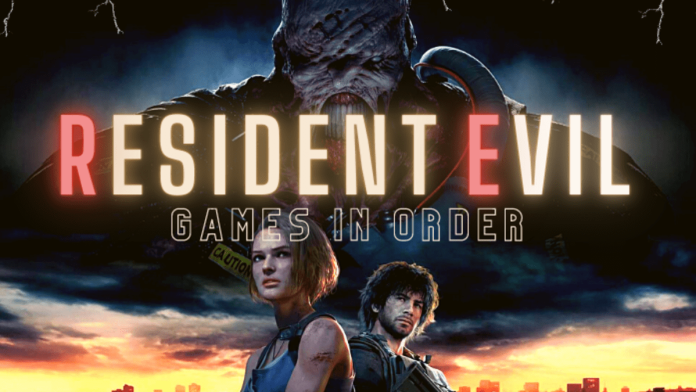 Resident Evil has always been the first choice of gamers who love to play horror video games, and still now, it is one of the most famous video game series with Hollywood movies based on it. In 1996, this game series debuted on the gaming platform, and after that, it has become one of the world’s top 20 highest-grossing video games. There are 9 resident evil games in the core series alone, with three significant remakes. Here, we will discuss all resident evil games in order. However, we will not discuss mobile games and other platforms of Resident evil.

Back in 1996, zombie survival games were first introduced to the market. These games revolve around a group of scientists, military men, and people who are trying to save someone, survive the zombie apocalypse, or find out something in that game. These games became popular in no time as these types of games were truly spine-chilling and full of excitement and adventures. Resident Evil is one of the most famous and most loved survival games that has ever been introduced on the market. Though the makers have changed the perspective of the game over time, the main idea of the game remains the same. Let’s have a look at all the Resident Evil game parts in chronological order.

All Resident Evil games in order:

It was the first part of Resident Evil released on PlayStation 1 and created by Capcom developers Shinji Mikami and Tokuro Fujiwara. The game plot was so interesting that it attracted a huge population within a few days. After the 2002 remake, this original version was not available on official game stores.

The story starts in raccoon city. It is where the first zombie apocalypse started happening. As a player, one has to play as Chris Redfield or Jill Valentine, who are the members of STARS, a police department for Special Tactics and Rescue Service. Every STARS member had an additional companion who is Albert Wesker and Barry Burton. The motto of this game was solving the mystery of the zombie outbreak. The player has to escape the zombie attacks and find out the truth.

It was the second installment of Resident Evil, and as Capcom released a remake of this second installment in 2019, you cannot find this original Resident Evil part 2 game in stores. In this part, 2 new characters were introduced to the game who were Claire Redfield, Chris’ younger sister and Leon S. Kennedy, a Raccoon City police officer.

In the game, these two characters needed to escape the city where thousands of netizens had become zombies. This part of Resident Evil introduced a new perspective of online gaming to the gaming platforms as in this part, each playable character has a unique storyline, challenges, and partners.

Capcom has released a remake of this part of Resident Evil in 2020, and that’s why you won’t find this part on official stores now.

The basic storyline of this part of the game was the continuation of the second installment of Resident Evil. In this part, all the characters were put under the control of Jill valentine, who must find a vaccine for the T-virus that is the reason behind the zombie apocalypse and escape Raccoon City. In this part, a new character was introduced, who was a mercenary, Carlos Oliveira. This character helped Jill to find the vaccine. On the other hand, Nemesis was periodically pursued by a bulky, undead creature. This installment of the game focused more on action rather than solving puzzles. New engines, 3D models, pre-rendered backgrounds, and fixed cameras were introduced in this part of the game.

It is the first installment of the game that is available on different platforms such as PlayStation 2, PS3, Xbox 360, and PlayStation 4.

This part of the game focuses mostly on puzzles, exploration, and research more than on action.

It was the first remake done by the Resident Evil developers that replaced the original title of the game. This one is available on PS4, Xbox One, and Windows 10. With this remake, the developers increased the horror elements, and improved the graphics and the models.

This part of Resident Evil was first introduced for GameCube in 2002. Now, one can find this game on PS3, PS4, Xbox 360, Xbox One, Nintendo Wii, Nintendo Switch, and Windows.

There are two characters in this part of the game who are Rebecca Chambers and criminal Billy Coen. They belong to the STARS unit that is going for the research on Arklay Mountains. According to the game, they succeeded in exploring an abandoned training center of Umbrella corporation, where they unleashed some secrets related to the T-virus.

This part of the game has more confusing puzzles, stronger enemies, scarier horror elements, and much more. In this part, the gamer can switch between two playable characters while playing as both the characters have some unique facilities to solve the confusing and tough puzzles.

Resident Evil 4 is most probably the most successful shooter of all time, and that’s why it has amazing popularity among gamers. It won multiple game of the year awards and also managed to sell over 11 million copies. This game is available on most of the platforms you can imagine, including Nintendo Switch, Xbox One, PS4, Oculus Quest 2 VR, Windows, and iOS.

This was the main part of the game that increased the game’s popularity among gamers and attracted new gamers as well. This time, the game was action-oriented with more weapons, modified survival elements, stronger enemies, multiple boss fights and more. In short, it was a complete package for game lovers. This game also changed the fixed camera angles for a moveable over-the-shoulder view that made the game more exciting and terrifying. An AI was also introduced in this game to control the game processes. According to the performance of the gamer, this AI technology increases or decreases the challenges. This game has more scary and strong enemies with unique strengths, weaknesses, and attacks.

Once more, you will play as Leon S. Kennedy where he is on a mission to rescue the U.S. president’s daughter Ashley Graham, who is in a cult in Europe. Here he finds a new type of virus which is a parasite and can turn a person into a monster. Now the challenges are harder, and you have to survive the game.

Though the game was not as successful as Resident Evil 4, it introduced one of the best features: local co-op. This time, the game allows you to play with another player. And, it was the first time Capcom used motion captures for the characters.

Chris Redfield and Sheva Alomar are now members of the Bioterrorism Security Assessment Alliance. At this moment, they are in Kijuju, a fictional region in Africa. Here they have found a new virus outbreak that is affecting the citizens. The plot takes the players against former Albert Wesker.

Though the gameplay is quite similar to Resident Evil part 4, it is mainly focused on sharp shooting and doesn’t have that much horror or survival elements.

The 6th part of Resident Evil debuted for PS3 and Xbox 360 in 2012. You can currently play this game on PS4, Xbox One, Nintendo Switch, and Windows. This was one of the highest-selling parts of the resident evil game series.

This time, you can play with 4 playable characters who are Leon S. Kennedy, Chris Redfield, Ada Wong, and Jake Muller. These characters belong to a worldwide force against the virus terrorist attacks that are turning human beings into monsters and zombies.

This time, every character has a stand-alone campaign which means one has to play the full game with each character. There are 4 stories happening simultaneously, meaning the player can see a different perspective of the story while playing with each character. Just like the previous part of the games, this game is also a fully-fledged action 3rd person shooter.

It is the 7th entry of the franchise that was released in 2017 on PS4, Xone, and Windows. Currently,  you can also play it on Nintendo Switch, Amazon Luna, and Google Stadia.

This time you can play with it in a stand-alone experience and also, you will be able to play from a first-person perspective. This part of the game is not much connected to the other parts of the series, but this time, the survival horror elements are scarier.

This time you wouldn’t play as a special force officer, but, you would play as an average civilian who is searching for his long-missing wife on a mysterious plantation. While finding his wife, Ethan Winters ( Your playable character), finds some clues about an affected family, and as the game goes on, the character faces different types of dangers.

According to the needs of the game, the character has few combat skills and also can use handguns, flamethrowers, explosives, chainsaws, and shotguns. He also has more qualities that would help him survive the affected family members and humanoid fungal creatures.

It is the second remake of the original Resident Evil part 2 game that was released in 2019. It gained huge popularity and premiered on Windows, PS4, and Xbox One.

The plot of this remake remains the same with the new format where you can play with Leon S. Kennedy or Claire Redfield once again. It has some updates to make the previous Resident Evil part 2 up to date. The changes introduced more difficulties to the experienced player. With an over-the-shoulder perspective, the game allows players to move freely, shoot, and move the camera.

It is the third remake of the Resident Evil franchise, where the developers added a dodge system to the game. This one is the remake of Resident Evil 3 that was released in the year 2020 on Windows, PS4, and Xbox One.

The plots remained the same, and developers added some updates in the game that were needed according to the time. Though the game was loved by critics and fans, some fans commented about the short length of the story and some missing features of the original story. The remake of the second installment of Resident Evil that was released in 2019 was 10 hours long, whereas this one was only 8 hours long.

It is the latest and the last installment of Resident Evil that was released in 2021 on Xbox Series, Xbox One, PlayStation 5, PlayStation 4, Google Stadia, and Windows.

It is the direct sequel of biohazard, where players can play as Ethan Winters once again. This time, the character is on a rescue mission to rescue his kidnapped daughter. After meeting with Chris Redfield, the character travels to a village inhabited by mutant creatures.

This time, the player can play in first-person perspective and has some limited skills to defeat the creatures. As an extra talent, Ethan can now create makeshift barricades for extra protection. This time, the game is more focused on action than suspense.

These are all the Resident Evil Games in order. Though Resident Evil has 9 installments, every game has a stand-alone perspective. After Zero, the connection between the games is not that significant, and each game afterward can be played as an individual game. Though it is recommended to play the original trilogy (the remakes) in chronological order, one can play the other games individually as well.