Both these devices come with pretty decent specifications which include Quad camera setup, up to 8GB of RAM, 5G, 50001 mAh battery with 25W fast charging, high refresh rate display, expandable storage of up to 1TB via micro-SD card, IP67 rating, and an affordable price tag.

Here’s have a detailed look at the specifications of both the devices.

The design of this device is identical to it’s predecessor with a punch hole cut out at the center of the display for a selfie camera and a vertical camera module at the back which houses a quad-camera setup and an LED flashlight.

Samsung Galaxy A53 features a 6.5-inch full HD+ Super AMOLED Infinity O display with a 120 Hz refresh rate. There is a center punch-hole cutout on the display for the 32 MP selfie shooter with an f/2.2 aperture. The device is powered by a 5nm fabrication-based octa-core chipset which has two cores clocked at 2.4GHz and six cores clocked at 2GHz. At the official presentation, the company did not disclose the name of the chipset. For storage, users can choose up to 8GB of RAM and up to 256GB of UFS 2.2 internal storage which can be expanded up to 1TB using a memory flashcard.

The quad-camera setup on the rear side contains a 64 MP primary sensor, a 12 MP ultra-wide sensor, a 5 MP depth sensor, and a 5 MP macro sensor. The camera setup offers features like Night Mode, advanced OIS, and VDIS. The device comes with the One UI 4.1 based on Android 12 out of the box and 5000 mAh battery with 25W fast charging and starts at $450 for the base 6GB + 128GB variant.

Along with the A53, the company also launched Galaxy A33 which has the same rear design but has a different front design. Instead of the punch-hole cutout, it comes with a waterdrop notch similar to its predecessor. 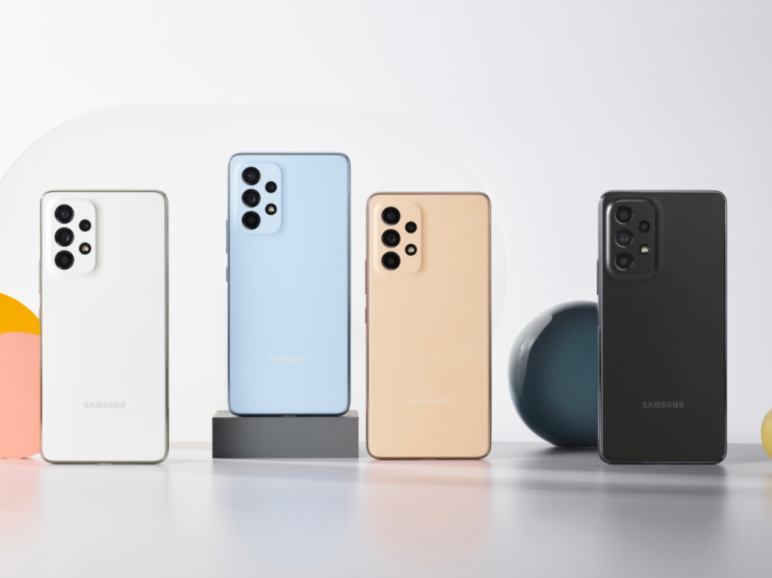 The device has a 6.4-inch full HD+ super AMOLED Infinity U display with a 90 Hz refresh rate. The Galaxy A33 features an octa-core chipset which has two cores clocked at 2.4GHz and six cores clocked at 2GHz and again Samsung did not disclose the name of the chipset. This device also comes in two storage variants that are 6GB of RAM & 128GB of storage and 8GB of RAM and 256GB of internal storage. The internal storage can be expanded using the external memory card of up to 1TB just like the Galaxy A53.