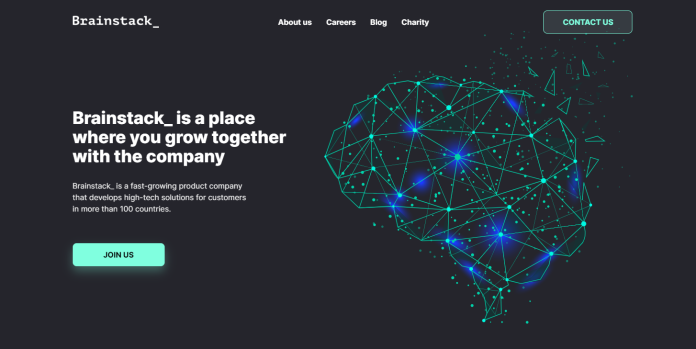 Brainstack_ is a Ukrainian IT company that was founded back in 2013. In the span of nine years, the team worked on a variety of products in the parental control niche. The products range from mobile apps to advanced standalone software.

Slowly but surely, Brainstack_ made its way to becoming one of the top B2C SaaS companies in Ukraine. The last two years were particularly fruitful, with the company releasing five new products that have already proved to be profitable. Going off of standard market multipliers, the company’s value currently reaches over $100 million.

“Get up…the war has begun.” On the early morning of the 24th of February, these long-feared words echoed across Ukraine as people were waking up to the sounds of explosions. In the blink of an eye, the world as we knew it ceased to exist.

The warnings about the build-up of Russian forces near Ukraine’s border had been circulating in the international media for months. Some thought it was inevitable; others tried to stay optimistic and hoped for a peaceful resolution. Whatever your opinion was, one thing everyone agreed on – it’s better to be over prepared and underwhelmed than it is to be underprepared and overwhelmed. In the weeks leading up to the invasion, Ukrainians started living a double life. People were going to work, hanging out with friends, making plans for the future – all while mapping out the nearest bomb shelters, stocking up on food and water, and planning evacuation routes.

Brainstack_ began preparing for the possible evacuation of the team from Kyiv long before the war broke out. Just a few hours before the first bombs hit Ukrainian cities, the company’s management was finalizing things concerning transportation and housing.

Evacuation to the West and Adjustment to the New Reality

The news about the start of the “special operation” caught most of us in our beds. As the first wave of panic started to subside, the cold logic settled in. This is what we’ve been preparing for. After a few calls, we agreed on a location where the buses were going to be waiting for our employees and their family members. In total, nearly 40% of the employees decided to move to the west, 10% stayed in Kyiv, the rest – left for their hometowns or to their relatives. One of the employees joined the Armed Forces and is currently protecting our country on the front lines. Four people enrolled in local territorial defense forces.

We had two arranged evacuation spots in western Ukraine. One of them was Truskavets – a small resort city near the border with Poland, where we managed to organize temporary housing in hotels. After settling in, we started thinking about ways to repay the local community for their hospitality. Our teams decided to offer their skills and resources to the city’s government. Brainstack_ employees already helped to launch the city’s new official website and started managing the “Трускавець офіційно” (“Truscavets officially”) Telegram channel. Specialists from Terrasoft, another Ukrainian IT company that’s relocated to Truskavets, took over the development of the city’s web portal and chatbots. We also contacted our friends and acquaintances in Europe and began cooperating with them to deliver humanitarian aid from various European countries to Ukraine. The first shipment, worth 20 000 euros, included food, sleeping bags, and medicine.

Our second relocation spot was Ivano-Frankivsk, where Brainstack_ opened its second office a few months before the war. A group of managers and employees who work there are now helping people with housing, food, laundry, and everything else they might need. They are also volunteering and donating money to various charities.

Although our office in Kyiv is temporarily “frozen,” 90% of the company continues working on the projects remotely. Currently, we don’t have a fixed working schedule, and every employee can choose the hours that suit them the most. Our HR team is in constant contact with everyone, inquiring about the teams’ mental state and making sure people are staying safe. All employees, including those who serve in AFU or TDF, continue receiving 100% of their salary.

How IT Army Became the Secret Weapon in Today’s Warfare

In the modern world, even wars have evolved and moved beyond simple weapon rattling on the battlefield. A few days into the war, we all witnessed the emergence of a new battlefield – the so-called “digital front.” On the 26th of February, Mykhailo Fedorov, Ukraine’s Minister of Digital Transformation, called upon volunteers across the country and overseas to join the newly formed IT Army. Over 300 000 software engineers, developers, underground hackers, and other IT specialists came together to show that we’re not the ones to mess with.

Besides protecting Ukraine’s online infrastructure, the main goal of the “cyber troops” is to paralyze the online resources of the Russian government, their largest corporations, banks, and telecom operators. The organization also concentrates on breaking the iron wall of the state-run media propaganda, trying to make the Russian people understand the size of the lie their government was feeding them.

Brainstack_ wasn’t going to stand aside, either. When the IT Army came around, it was our chance to put our skills to good use. We have a large infrastructure and experience in the creation of complex services, so our infrastructure team created a distributed system with centralized management that allowed us to dynamically modify and execute DDoS attacks. In addition to DDoS attacks, all company employees take part in blocking/reporting resources that spread Russian propaganda through messengers and social media.

What Comes Next for Brainstack_

It’s hard to talk about the future when the situation can take a drastic turn at any minute. Every moment right now is quite literally shaping the history of Ukraine and the world as a whole. But one thing we know for sure – Brainstack_ isn’t going anywhere. It’s always been and always will be a Ukrainian company. We’ll continue hiring and training new talents, giving people the chance to showcase their potential and support the country economically. After all, IT is now one of the few industries that still allows people to provide for their families and friends who have lost their jobs because of the war. We’re extremely lucky that our business can’t be destroyed by tanks and rockets.

How to Lose Weight in 5 Simple Ways

UX/UI Design Trends That Will Dominate in 2023

Stellar Converter for OST Review – Is the Best Choice in 2023?