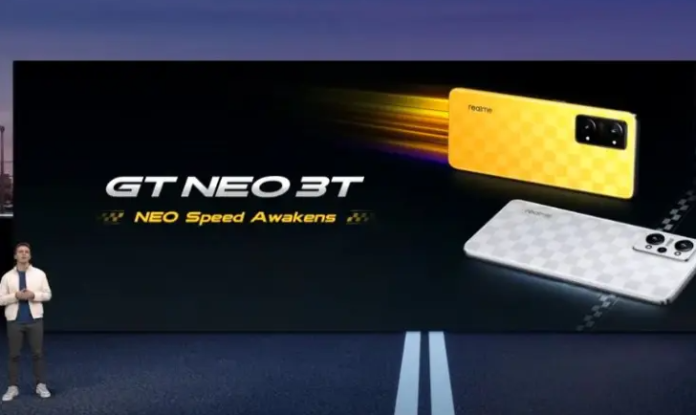 Realme today launched another device under it’s GT Neo 3 series which is called The Realme GT Neo 3T globally. The device is the rebranded version of Realme Q5 Pro which was launched previously. Realme launched the device along with the GT Neo 3 which is only available in Chinese and Indian Market as of now. Let’s talk about the specifications of the said device.

As mentioned, it is a rebranded version of Realme Q5 Pro so the device looks almost similar to the Q5 Pro. There is a check pattern on the rear side of the device and it is available in Drifting White, Yellow, and Shade Black Colors.

Realme GT Neo 3T comes with a 6.62-inch Full HD+ Samsung-made E4 display panel that supports 120Hz fast refresh rate, 360Hz touch sampling rate, HDR10+, up to 1300 nits of maximum brightness. The top left corner of the device has a punch-hole cutout for the 16 MP front camera for selfies and video calls. It also has an in-display fingerprint sensor for additional security at the bottom of the display.

The device is powered by the mid-range Qualcomm Snapdragon 870 processor which is coupled with 8GB of LPDDR5 RAM and up to 256GB of UFS 3.1 internal storage. The rear side has a vertical camera module that houses a triple camera setup and a dual-tone LED flashlight. The triple camera setup consists of a 64 MP primary camera, an 8 MP ultra-wide lens, and a 2 MP macro lens.

Along with this device, the company also launched Realme GT Neo 3 which is quite similar to the GT Neo 3T but with only a few changes.