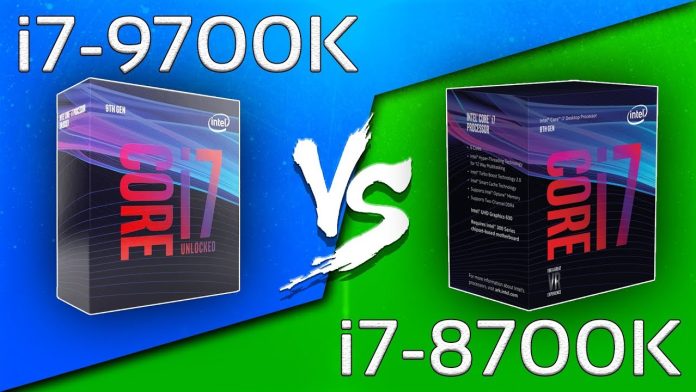 Intel core i7 8700k and Intel core i7 9700k are both amazing high-end CPU processors. Though Intel has already launched the 10th and 11th generation of the processor, no one can deny that the 8th and 9th generation is still improving and are perfect for this era as well. These computers can be a bit weaker than the 11th generation processor, but they still offer top-notch performance with no hiccups or delay.

If you are confused between these two amazing processors offered by Intel, we are here to discuss them with you so that you can decide wisely. In this article, we will discuss which one can be the perfect choice for your next build-up.

Though the Core i9 and Xeon series offered by Intel is undoubtedly the most extreme CPUs offered by Intel, it doesn’t deny the fact that Intel core i7 still has it’s market because of some obvious reasons. It is a high-end computer CPU offered by Intel. Besides providing the users with amazing performance, this also comes at an affordable price, which is obviously a reason for it’s success. If you are planning a new setup for gaming or productivity, it can be a good option for you.

Before moving further with the article, let’s know about both these processors in brief.

Previously, Intel had no competitor in the market, and that’s why they were quite relaxed about their grip on the market. However, when AMD introduced the Ryzen processor, it literally surprised Intel authority. As a result, they started to work on their processors even more. AMD took an amazing marketing strategy: providing more cores at a comparatively lower price. As a counterattack, Intel increased the core count in the 8th generation processor. The Core i7 was introduced with 6 cores and 12 threads.

8700K is clocked slightly higher than the previous Intel Core i7 7700k and has 2 lesser cores. Though the base of the core 8700k was 3.7 GHz, which is lower than the older core i7 7th generation processor and the 6th generation processor, it had an amazing boost clock value of 4.7 GHz. We also have to mention the clock multiplier value, which is 37.

Besides that, it comes with 95W TDP, and also it is ideally cooled with its quality stock cooler. One can use an AIO cooler or opt for water cooling in the case of overclocking. Previously, this processor’s price was around $385, but nowadays, it is around $400. You can find one if you are desperately looking for it as it has become difficult to find in the recent market.

Though in Intel Core i7 processors, Intel gave attention to hyper-threading, in 9700k, it used something which is the same with The 8700k. This processor also comes with 8 physical and 8 logical cores.

Though the base clock of 9700k is not that impressive as it has only a 3.6 GHz base clock, it ramps up to 4.9 GHz. On the other hand, the clock multiplier rate is 36, which is quite impressive and can efficiently push over 5.1 GHz in the case of overclocking. Now, if we mention other features of 9700k, we can mention it’s impressive TDP of 95 watts. The processor uses the stock cooler in vanilla settings which helps the processor to keep cool when used. If you are overclocking the processor, you can always use an AIO water cooler.

Talking about the price, the processor was launched with a price rate of $359, but unlike 8700k, the price dropped, and in the recent market, one can get it at any price within the range of $260 to $300. According to the market experts, the reason for this price drop is nothing but Ryzen 3000.

The Core i7 8700K and the Core i7 9700K share several things in common. We have mentioned previously that both processors use Coffee Lake architecture and come with similar specifications. Before comparing these two processors, let’s briefly discuss their similarities:

In the multicore performance, they have some differences as core i7 9700k comes with two additional cores. But if we discuss single core performance, both processors share several similarities.

If we discuss the differences between the i7 9700 K and i7 8700k, we can say that both are the same, but the Intel core i7 9700k just has two extra cores and a removed hyper-threading. The 9700k is nothing but the revised version of the 8700K, which was created in a hurry as because of the increased demand for Ryzen CPUs in the market, Intel has to increase the core count and push the 14nm process node to it’s limit to continue being the leading company on the market.

If you have enough knowledge about the processors, you may know that Intel provides many versions of every core series. The i7 also comes with more than 3 versions, such as Core i7 9700K, Core i7 9700KF, and Core i7 9700F. Though they are the versions of the same series, they are differentiated with the suffix at the back.

Though they are older CPU versions, it will be fair if we compare them with 9th generation and 10th generation Intel core processors as these processors have already launched into the market. The Core i5 9600K and Core i5 10600K can reflect how much the core lineup has recently improved.

In this comparison, we can say that 9700k is better.

7-ZIP: A higher point is better

In this comparison, 9700K wins

9700K offers more impressive results in this comparison as well.

In this comparison, 8700K is the winner.

If we give enough attention to the comparison, we can clearly see the influence of an increased TDP and clock speed. So, we can conclude saying that the i7 9700K offers a more powerful processor with a performance rate that is increased by 5% to 7%. This is not a great consideration if we look at the extra 2 cores and bumped up the clock speed of the 9th generation.

As we have already tested the performances of both the processors, it’s time to check which processor can give a better experience to gamers. Here, all the gaming tests are done with 1080p with high settings. This is the perfect resolution to display the power the processor has. We could have tested it under 1440p resolution, but the graphics card would not be able to influence the gaming performance to the fullest. For the best result, we have chosen 1080p. The results were shocking as the CPUs scored similarly with little to no differences. If you think the generational jump will increase your gaming experience, we need to tell you that it will not do anything like that. Only in CSGO, there is 1% difference in the performance as this pushes frames more than intended. It is also clear that being an 8 cores processor, the i7 9700k doesn’t have any noticeable differences from i7 8700K with 6 cores. The gaming usually depends on the single-core performance of the CPU and in this case, there is very small to no difference between these two processors.

While purchasing a processor, the price plays a big role as it is important to consider whether you are getting value for money or not. The processor’s pricing is something you should consider while choosing the perfect one for your upcoming set.

First, let’s talk about The Core i7 8700K. Previously it had a pricing of around $386 when it was first launched on the market. With time, the price of this processor has increased, and now it is retailed for around $400. As it is an old processor, we can say that it is a bit too expensive.

In this case, Core i7 9700K has some benefits. When it was launched for the very first time, it was retailed for around $349, but with time, the pricing went down, and now you have to invest something around $260 to $300 to get one. You should thank Ryzen 300 and Ryzen 5000, who became a threat to the market of Intel, and the company needed to cut off the price.

So, if we discuss the value comparison, we can say that buying a new Intel core i7 9700k will be a better option.

As we are almost done with the comparison, let’s have a quick look at the pros and cons of each processor so that you can make your decision wisely.

We can say that the Intel Core i7 8700k is still one of the best CPUs out there, and it is an efficient processor for gaming. If you own one and are willing to upgrade to 9700k, we would say that it is not needed, especially if you are into games. Because of it’s hyper-threading qualities, it can offer gamers an efficient gaming experience.

If you are willing to build a setup from scratch, we would say that the i7 9700k is your best option. For new buyers, it is an excellent processor within your budget that is not much different from i7 8700k. It also comes with an increased TDP uplift in single-core performance.