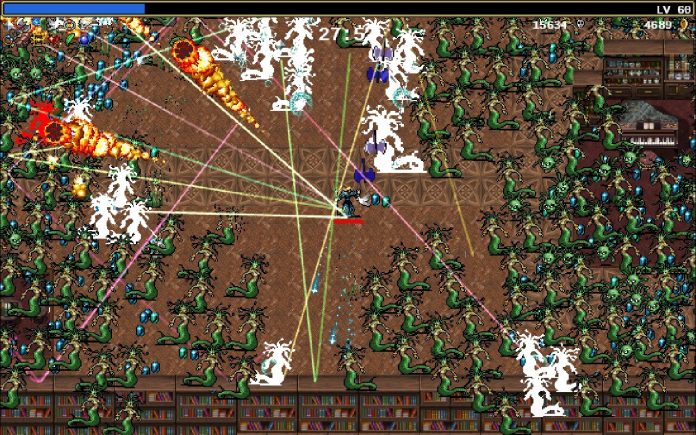 Vampire survivors is a minimalist survival game where players need to outlast a horde of monsters developing continuously. The game is famous among game lovers because of it’s amazing gameplay and interesting strategies. There are some amazing tips that you can use to win this game. For example, if you can outlast the horde for more than 30 minutes, you will be rewarded with a meeting with death. There are several other interesting facts that we have discussed about this game below. If you want to know all of them, go through this Vampire Survivors Wiki guide completely and enjoy the game at your best.

You will need to come across different types of enemies in the game. Some of the enemies can have a stronger variation range that can expand from a little HP boost to a boss-level upgrade. If you want to defeat your weaker enemies and mine the stronger enemies for your chest, you need to have an idea about how healthy they are.

To win the game, you can target your weak opponents, such as the entry-level bats and blue ghosts, which will help you reduce the horde and accumulate the XP gems you can use for quick upgradation. Whenever you find yourself surrounded by difficulties, try to identify the weaker enemies and kill them to clear a passage so that you can reach the precious things in the game, such as the floor chicken.

Here we have mentioned some tricks and strategies that you can use to get the gems in the game and upgrade your level.

Usually, players try to play defensively in this game and do not try to take down the enemies much. You’ll need to remember that it is a survival game, and the best strategy to win the game is defeating your enemies. If you continue to defend yourself, it will weaken you, and eventually, your defense will become weaker as the horde grows in size and power. On the other hand, if you can defeat your enemies, you can gather the XP gems. Also, you will be able to update your stats and equipment. So, go for the aggressive mindset to win the game.

Once you start making progress, you will get money off the ground that you can pick up. Also, you will get a huge amount of currency after opening the chests. Players who can manage to survive the horde for 30 minutes, finishing a level, will also receive 500 coins as a bonus. Spend these coins as you can power up 18 various traits that will prepare you for your upcoming run. Don’t hesitate to spend them as the game will offer you a refund system by using which you can get all your money back. For that, you will also not need to spend any money.

Know how to use Floor Items

Besides XP gems, you will also be able to gather a few floor items that can help you to get features like a flamethrower, time-stopping ability, a magnet to pull all nearby XP-gems, etc. Do not use these items in a hurry as you will need those in some situations. They have a powerful nature. You should try not to grab these items until the enemy horde is dense enough to maximize the item’s effect. These special items can save you in the worst situations.

While running, you will be able to get a variety of randomly generated weapons. Players can find it difficult to get evolved weapons. These weapons can give you the ability to attack with a great area of impact and serious damage to devastate the enormous horde. Also, the evolved weapons have some unique effects and bonuses. When you are done leveling up a few weapons to level 8, take the appropriate item to eliminate a tough enemy who drops a chest at least 10 minutes into your Run. This is how you can use the evolved weapons to win the game.

Here we have mentioned about all the weapons in the game and how you can unlock them.

Weapons available in the game and how to unlock them:

Enter Every Run With A Goal

Don’t enter any run just because you want to get through it. Have some other objectives, such as selecting the powerups, Arcanas and weapons which will aid you reach the ultimate goal, unlock a character, or finish a particular achievement.

Use the fluid items and the coins strategically so that you take less damage and get the products you can use later to unlock stronger characters.

All Item Upgrades and How to Unlock Them:

In the patch 0.7.2 update, new weapons and items were added to the game. Here we have mentioned all the new items and staff that you can get in the new update.

The character’s initial weapon, Vento Sacro, can be obtained if players succeed in keeping Zi ‘Assunta Belpaese alive for 15 minutes. Vento Sacro’s assault animation is also identical to it’s sister weapon, the Whip. The difference is that, unlike the Whip, it attacks horizontally in the direction you are facing.

You can unlock Vento Sacro, the starter weapon for the new character, by keeping Zi ‘Assunta Belpaese alive for 15 minutes. Vento Sacro’s assault animation is identical to it’s sister weapon. This weapon attacks in the direction you are facing instead of attacking in a set upward orientation.

It is a special weapon that can be unlocked by wielding 6 different weapons simultaneously. Remembering the parts of a few weapon evolutions in advance is always favorable. This will help you to identify the elements you need quickly.

It is advised to avoid difficult combos such as Crimson Shroud, Infinite Corridor, and Phieraggi when you try to get 6 weapons evolution at once. These can demand a lot of time as well as XP expenditures. Besides that, it can reduce the number of evolutions you can construct in a single run. Players can go for secret characters with evolved weapons as in their starting, such as Red Death and Minnah.

When you first obtain this weapon, it will raise your Might, Projectile Speed, Duration, and Area by 4%. It raises these attributes by 3% from Level 2 to 8. You will need to use it tactfully, as whenever you upgrade it to level 9, it will increase your opponent speed, health, quantity, and frequency by 100%. You can try to prevent buffing your opponents by playing a Banish.

So, here we are ending the vampire survivors wiki guide. We hope you got the answers to all your questions and understood how you could play the game using strategies and survive till the end.