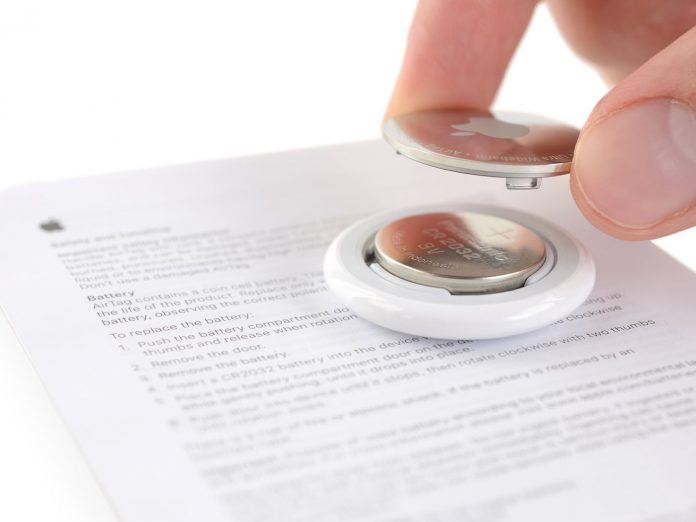 AirTags are cleverly designed little circular trackers that are meant to locate your things. They use the network of active iPads, iPhones, and other Apple devices to locate the things over which you have place the tracking device. Wallets, keys, etc. are the most common accessories that we misplace. With an AirTag attached to these items, they can be tracked with the help of Bluetooth and the Find My application of your iOS device.

An AirTag looks like a small button having a white glossy front and silver back. The front can easily be customized with an engraving if you like. Every AirTag has a U1 chip in it that lets you see its exact location, outdoors or indoors, or the last location. You have the option to ask Siri to locate AirTag without making any sound or play a sound through the Find My app to locate the AirTag, hence your accessory that you are trying to find.

AirTag runs with the help of a CR2032 battery that will last you for a year before having to replace them. Once the battery runs out you can easily replace it with a new one and the AirTag will resume its functions just as before. The app will show you the battery capacity and send you a notification when you require replacing it. Before you run out on the battery completely, purchase one or two and keep it when you have to replace it.

The CR2032 batteries are easily available in most general stores and online too. They are pretty cheap and once you have purchased them can easily change the battery. Here is a detailed guide on how to change the battery of AirTag.

How to change the battery of AirTag:

Hold and press down the stainless-steel back of your AirTag

As you are pressing it down, rotate it anti-clockwise till the rotation stops

The cover will come off easily, you will be holding two halves of the AirTag

The battery is visible in one half, pull out the old battery and place the new one in the same way as the old one. The positive sign on the battery should remain facing up.

Go to the Find My app and check the battery capacity of your AirTag to ensure that the battery has been placed properly.

The AirTag is quite efficient and if stolen can easily be located with the Find My network. The app utilizes the network of several iOS devices and helps you locate the AirTag. There is a Lost Mode in the app where the AirTag will send a notification to you automatically as it is detected by someone’s device in the Find My network. Adding your contact details will let the other person get in touch with you so they can return your AirTag.

AirTags are small but efficient little things that can help you locate your accessories that you often tend to lose or misplace. Follow the above instructions to change the battery of your AirTag so you can always have them functioning as they should.

How to enable dark mode in Google Search?

How to enable and disable disappearing messages feature on WhatsApp?

How to Fix the Microphone icon missing in Gboard keyboard?

How to add Shortcuts to Apple Watch

How to enable dark mode in Google Search?