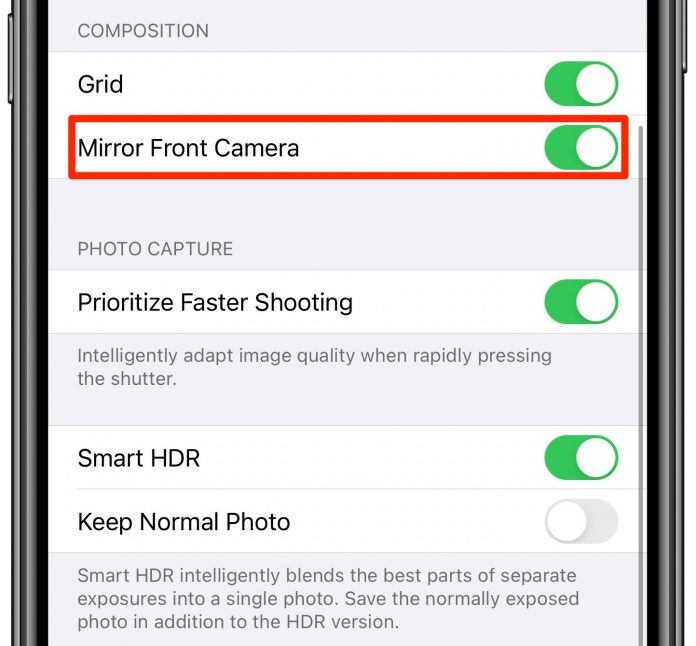 Apple has done an excellent job of upgrading its camera features over the years, making taking selfies on an iPhone a breeze. Indeed, the recently released iOS 15.2 update includes a much-desired feature that allows users to quickly enable and disable Macro mode on iPhone 13 Pro handsets. However, many users may be unaware of a small camera feature called as Mirror front camera available since iOS 14 that allows users to control how their selfies appear after pressing the shutter button.

When you use the iPhone camera to take a selfie, the viewfinder shows a mirrored version of the front-facing camera because most people are accustomed to seeing themselves reflected in mirrors. The original source image is saved to the Photos library when the photo is taken, so the preview does not match the final photo. You can change this behavior in iOS 14.

This has been a long-standing omission on iOS, and an entire App Store sub-community has sprung up to fill the void. This simple setting has finally been integrated into the main Camera app with iOS 14. Apple made us wait this long for what amounts to a simple setting change, but here we are.

Continue reading this article to learn what a mirror front camera feature is and how to enable it.

What Is Mirror Front Camera On Apple iPhone?

When you take a picture with the iPhone’s front-facing camera, the image is automatically flipped horizontally. The iPhone camera setting ‘Mirror Front Camera’ allows users to take mirrored selfies and capture the image as it appears in the front camera frame. This minor change to an iPhone’s image orientation isn’t as significant as increasing the camera’s megapixels. Still, it does help the user in a small way by providing snapshots that match what they see mirrored on their phone’s screen.

How to Mirror Photos Taken with Front Camera on iPhone & iPad

Although mirroring the front camera is a simple procedure, it is not done within the Camera app. Follow the steps to enable the feature:-

From the home screen of your device, open the Settings app

To adjust your camera settings, go to the settings menu and scroll down to “Camera.”

Then, again scroll down and go to the Composition section. Here you will find the option to mirror the front camera. It’s turned off by default.

Now, toggle the mirror front camera switch to the green ON position

If you use the stock Camera app to take a selfie now, the final image will look exactly like the preview. Keep in mind that the camera still sees you the same way it did before, except that the image is immediately flipped after it is taken.

Also, remember this option is only available in iOS 14 and later, so if you are using an older version, you will need to update your operating system. If you are stuck on iOS 13 or earlier, for the time being, you can use the Photos app’s built-in photo editing tools to manually mirror your selfie photos after the fact.

In Photos, open a selfie photo.

Now, select the crop controls option, the third icon in the bottom toolbar

Press the Flip button in the top left corner of your iPhone’s screen.

Apple users who have grown accustomed to seeing themselves on a photo-taking app and want the final product to look exactly like they see it will appreciate the ability to take mirrored images.